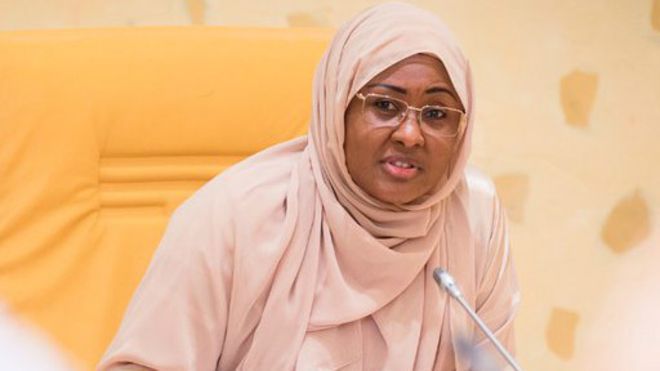 Aisha Buhari, wife of President Muhammad Buhari has restated that there were men in the presidency that constitutes clog in the wheel of her husband thereby preventing him from performing obtimally.

Aisha stated this Tuesday but could only say these men were two in number without mentioning their names.

She went further to disclose that the present government has achieved a lot but could have achieved more or even achieved all it has in one year but for the two people in government who will never allow things to move fast, she revealed at a conference organized by Project 4+4 in Abuja.

She said there were people who rather than fight these two men will go to them in the night begging for favour.

The President’s wife after the protocols said Nigerian women should rise up and fight.

According to her at the occasion said; ” I have realized that Sen Babafemi Ojudu, SA political to the president, and Dr. Hajo Sani, my aide Sajo and wife of the Vice-President Mrs Osinbajo are not comfortable with my saying this and want me to confine myself to my prepared speech but we must say the truth”

The president’s wife said the powerful duo are retrogressive elements preventing the government from moving forward.