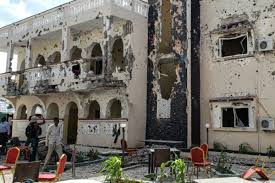 The death toll from a hotel attack in Somalia rose to 26 on Saturday with victims including Kenyans, Tanzanians, Americans, a Briton, a Canadian as well as prominent Somali politicians.

A presidential candidate for upcoming regional elections was also killed in the siege in Kismayo city that was carried out by al-Qaeda-linked al-Shabab, Jubbaland President Ahmed Mohamed said in a statement.

More than 50 people were also wounded. Police in the southern port city earlier put the toll at 13.

“The operation is over. The four attackers were shot dead,” police officer Major Mohamed Abdi told Reuters news agency by telephone from Kismayo.

Al-Shabab members stormed the hotel after detonating a car bomb on Friday while local elders and legislators met to discuss approaching regional elections.

“We are heartbroken by their sudden violent deaths. But rest assured, we are also as mad as hell because of it,” he tweeted.

Politicians and journalists were among the dead.

“The operation was concluded at 7am… These are the prominent people. The death toll is sure to rise,” local elder Ahmed Abdulle said.

Authorities said a suicide bomber rammed a vehicle loaded with explosives into the popular Medina hotel, which was followed by a gun battle.

A journalists group confirmed two journalists were among the dead; Somali-Canadian Hodan Naleyah, founder of Integration TV, and Mohamed Sahal Omar, a reporter from SBC TV in Kismayo.

“We are saddened and outraged by this loss of life, and condemn in the strongest possible terms this appalling massacre,” Mohamed Ibrahim Moalimuu, secretary-general of the Federation of Somali Journalists, said in a statement.

Summary of July 12, 2019 Proceedings of the Presidential Election Petition Tribunal