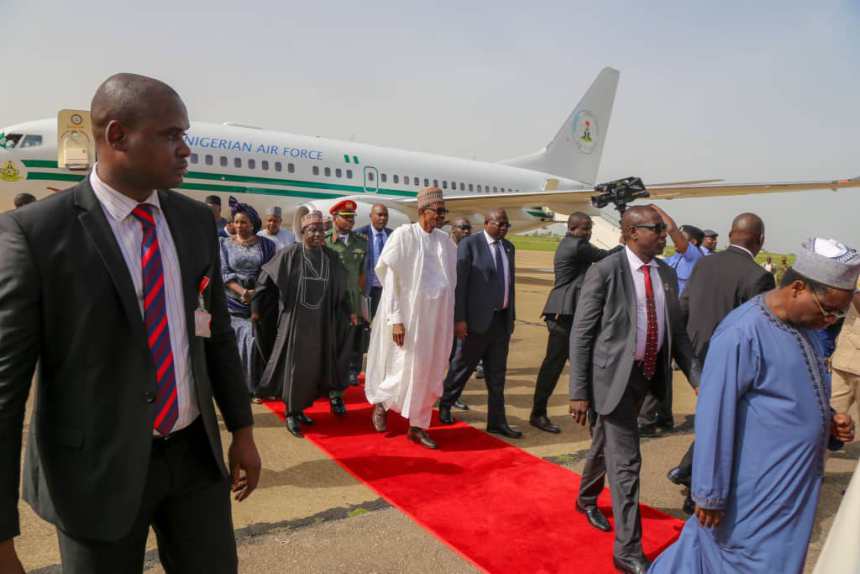 President Muhammadu Buhari has reiterated the commitment of the federal government to bring an end to the killings in Plateau State.

Mr Buhari stated this Tuesday in Jos at the Government House during a security meeting with warring factions in the Barkin Ladi violence that claimed over 86 lives over the weekend.

He arrived at about 4.14 p.m., and proceeded into the meeting immediately.

The meeting later went into a closed-door session, with only the affected community leaders and top government officials allowed in. The Deputy governor of Plateau State, Sonni Tyoden, was also present at the meeting.

A credible source who attended the meeting told PREMIUM TIMES one of the Berom speaking representatives at the meeting lamented that the attackers could be foreigners ”harbored by indigenous herdsmen who had lived peacefully with the natives over the years.”

He said Berom representatives at the meeting lamented inadequate security within the communities.

Addressing journalists shortly after the meeting, the Senior Special Assistant to the President, Garba Shehu, said Mr Buhari charged traditional and community leaders to call their subjects to order and live in peace with one another.

Earlier, in a welcome address before the meeting, the governor of the state, Simon Lalong, told Mr Buhari that the state was devastated.

Mr Lalong also requested for special funds to help rebuild the affected communities. Over 50 houses were razed in about 11 communities during the bloody spree of violence allegedly perpetrated by armed herdsmen.

“Mr. President, given the number of villages that have been completely ravaged, I wish to re-echo the earlier request we made as a state, for an emergency special intervention fund to help us reconstruct our ravaged communities,” Mr Lalong requested.

Security operatives stationed at the venue of the meeting with the president barred journalists from the hall and this nearly degenerated into rancour.

In spite of the earlier visit by Vice President Yemi Osinbajo on Monday, and that of Mr Buhari, it was gathered that some persons were reportedly killed in the early hours of Tuesday at Dogo-Nahawa, a village in Barkin Ladi local government. This could not be independently verified.

Both Messrs Buhari and Osinbajo could not visit any of the communities affected by the violence, nor the injured being treated in various hospitals.

The president left for Abuja at about 5.55 p.m.

The police command in Plateau had on Sunday confirmed the killing of 86 people in attacks on Razat, Ruku, Nyarr, Kura and Gana-Ropp villages of Gashish District in Barkin Ladi Local Government Area of the state.

The Plateau Government had since announced a dusk to dawn curfew in Riyom, Barkin Ladi and Jos South local government areas to check possible breakdown of law and order in the state.

W’ll continue to kill and reclaim our inheritance- Fulani body