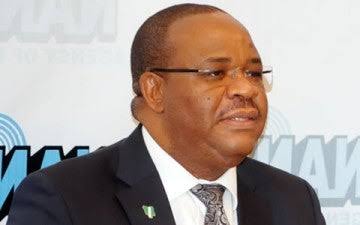 Dr. Mike Onolemenmen was obviously excited by what he termed the home coming of brothers and sisters welcome the new members to the great party, PDP, which he described  as a people oriented party where every member benefits, as all members are equal and all carried along.
He disclosed that at as a member of the campaigns council, he will ensure that the door to door awareness is carried out in all the units and wards in Esan North East Local governmentArea.

Also speaking, the party local government Chairman, Clifford Inegbedion, described the new members movement into the PDP as a welcome development not only to the people of Esanland but Edo State at large.
“The People’s Democratic Party (PDP) as a party is populated by real Democrats with strong architecture in place.

” I plead, that you provide the needed support with one voice towards the re-election of the Executive Governor, Godwin Obaseki, come 19 September, .
2020.

In his response, Rt. Hon. Okiye the Edo State Speaker (EDHA) who was accompanied by other decampees said, though he was new in the party meeting today, his last name “OKIYE” was in mind with the PDP.

He also said that, he was trained in the political climate by ” our late FATHER, Chief Tony Anenih.  He observed that the structure of the PDP is devoid of unnecessary bottlenecks and as it was easier to get things done as opposed to what is obtainable in the APC as a party.

He therefore called on the great Esan people to support and vote for Executive Governor, Godwin Noghaghese Obaseki to continue his good works across the state, coupled with the realization of an ” Esan Agenda” after his second tenure.
Hon. Pharm Emmanuel Okoduwa, Hon. Austine Okoibhole, Chief Okoror and others also pointed out that they were going to take advantage of the seamless PDP structure to the grassroots across the eleven Wards in Esan North East Local Government Area, would work assiduously to return the governor for a well deserved second term in office.

NDDC Fraud: PDP Asks Akpabio To Step Aside For Investigation