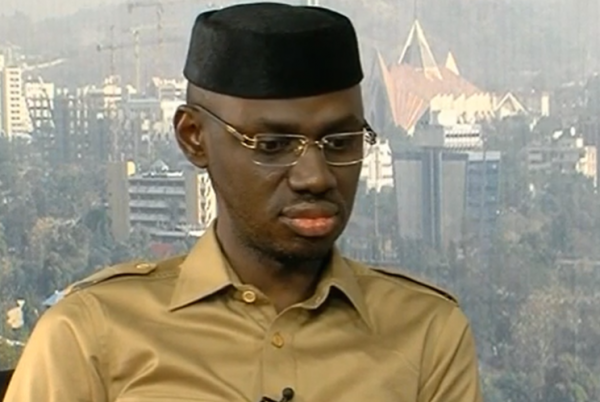 Finally embattled immediate past Deputy National Publicity Secretary of All Progressives Congress (APC) Comrade Timi Frank, has dumped the party, assuring Nigerians that he will continue to speak  against injustice, intimidation, political persecution, criminalisation of all opponents of the ruling party.
Frank, silenced on his next political sojourn said he is ready again to contribute his quota to the progress and development of Nigeria by joining hands with progressive forces to rescue it from collapse, poverty, corruption, tyranny, ignominy and undemocratic leadership.
In a statement Frank released on Friday morning, he thanked his supporters, both home and abroad, for their encouragement during his stay in the APC which he said has continued to be a soothing balm to him “under this arid regime and also to inform them of my decision, after extensive reflection and consultations, to leave the APC and to commence afresh the struggle to reestablish the rule of law, respect for the fundamental human rights of Nigerians and the restoration of justice, fairness and equity in the conduct of affairs in this country, irrespective of the personality that may be at the helm of affairs at any given time.”
The Bayelsa born politician recalled that when the APC was formed in 2014, he was among the early joiners also narrated his regret in the party.
“I was one of the early joiners from the PDP, having been dissatisfied by the unsustainable trajectory  of the last administration which I felt no longer possessed the political will to make Nigeria and her democracy reflect the lofty dreams of its founding fathers which among others was to unleash the untapped potentials of the Nigerian citizenry, especially her vibrant youth population ever eager to take their place in the economic and socio-political advancement of the country.
“My decision to join the APC then was based on its promise that things were going to change for the better. Regrettably however, rather than lead the country with egalitarian principles that would under-guide the nations quest for development and progress in the mould of her counterparts in the international community, the country has taken a deep plunge backwards under the leadership of the APC, with high level of tyranny, victimization, harassment, and political desperation, we thought had been consigned to the era of military dictatorship in the country, again rearing its odious head. Although, I am a direct victim of injustice and intolerance in the party but I continued to speak out because I have zero tolerance for injustice anywhere.
“While I consider the APC as a failed project, I am ready again to stoop and contribute my humble quota to the progress and development of this country by joining hands with progressive forces to rescue it from collapse, poverty, corruption, tyranny, ignominy and undemocratic leadership.
“Let it be clear that I am stepping aside from the APC  to be the voice for the majority of voiceless Nigerians who daily suffer the bad policies and highhandedness of this administration. I want to continue my fight to ensure a better Nigeria, where injustice, corruption, killings and bloodletting will cease to exist .
“I want to make it unequivocally clear that I am returning to continue my struggle against forces who are bent on ruining the economy and governance of this country through lack of vision, ineptitude, wickedness, and outright disregard for the welfare and security of the ordinary Nigerian. This I hope to do until Nigeria is rid of injustice, intimidation, political persecution, criminalization of all opponents of the ruling party, and open attacks using the nation’s security agencies. Nigerians need a voice to speak for them in this evil days and I want to be that voice.
“Besides, I want to put on record my deep respect for the former Governor of Edo State and National Chairman of the APC, Comrade Adams Oshiomhole, especially during the days of his comradeship where he fought and got a new minimum wage for Nigerian workers under the Obasanjo administration. However, it is most unfortunate that Oshiomhole who was once a voice for the oppressed workers and masses in the country is today serving the worst party in the history of Nigeria. Even though my respected senior colleague in the struggle has chosen to  turn a blind eye to the pathetic plight of the Nigerian workers, including government’s refusal to accede to their request for a new minimum wage in the last three years, I will continue to speak for the voiceless in this country

Breaking: 9 APC state exco members defect with 6,208 others in Osun