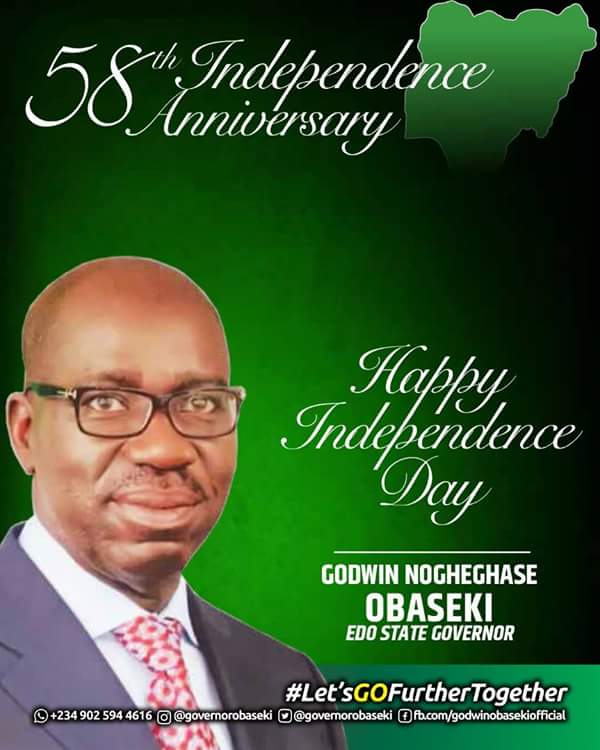 The governor, in a statement, reflected on the sacrifices and broadmindedness of Nigeria’s founding fathers, noting that the efforts of past heroes shall not be in vain as Nigeria remains on the path to greatness.

According to him, “On behalf of the government of Edo State, I heartily salute all the people of our great country Nigeria, as we celebrate the 58th anniversary of the nation’s independence.”

He noted, “As we mark this historic event, let us passionately reflect on the memory of our broad-minded and visionary founding fathers who labored day and night to secure our freedom on October 1, 1960, thus creating for us a sovereign nation under God.

“On this day, I join all patriots to once again affirm that the labour of our heroes past shall never be in vain.”
Noting that Nigeria has remained together despite challenges, he said, “We have indeed travailed and triumphed over several challenges and have remained united, resolute and undaunted.

“The hiccups in recent times are normal occurrences in a democratic, developing nation and would naturally be overcome because democracy has self-correcting mechanisms.

“Like millions of Nigerians, I believe that Nigeria, indeed Edo State will continue to witness transformation in every sector, remain politically and economically strong and indivisible in line with the principles of our founding fathers.”

On the commitment of his administration to sustain the gains of independence, he said, “Edo State Government will continue to renew its robust commitment to social justice, security, economic development, improved infrastructure and education as well as health care delivery system.”

He urged all Edo people and all Nigerians to join hands with government and peacefully lift the nation to higher heights of greatness.