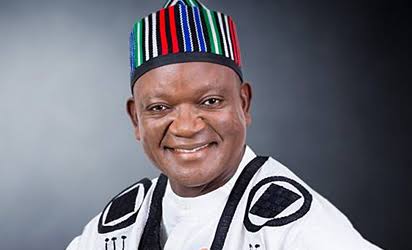 Born on 23rd April 1961 in Guma Local Government Area of Benue State, Ortom is the prodigal son that chose to forge a living for himself at a very tender age due to his poor background.

As a street kid he once acted as a bus conductor to a “danfo” driver and his astronomical ascendency to political stardom is phenomenal.
Some of the highpoints of this “Elephant in the Savannah” includes among the following;

*Amnesty to all renege groups in the state at the beginning of his tenure as governor which has led to relative peace and perfect security in the state. This he was able to ensure through provision of over a hundred brand new trucks to security agencies like the police, military and paramilitary.

*His courage to speak out against the federal government over injustice in the country like veiled support of the FG for the rampaging herdsmen that have led to deaths and loss of properties of innocent Nigerians especially those of Benue stock.

This has earned him the angst of the Federal government that culminated in the freezing of Benue state government accounts. All in attempts to cripple his government and lead to general unrest thereby culminating in the declaration of a state emergency in the state.

*The enactment of the anti-grazing law and implementing it to the last letter and putting in place a livestock guard to salvage the situation.

* Being the first governor since the creation of the state to pay for the accreditation of the school of health sciences at the Benue state university, Makurdi.

*Appointment of an academic professor in the person of His Royal Highness, Prof. Agatse as Tor-Tiv in a selection seen to be acceptable to the generality.

Fmr Lgs Gov. Ambode thanks Nigerians for endorsement, urge youths to get PVCs