IGP Ibrahim still not keen on appearing before Senate 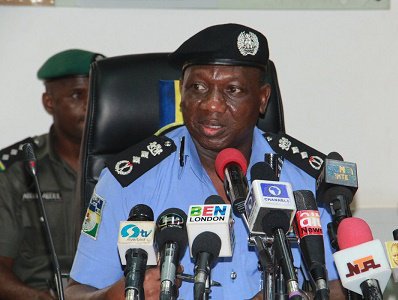 The Inspector General of Police (IGP), Ibrahim Idris has given reasons why he cannot personally appear before the Senate.

The IGP, who faulted the Senate’s insistence on his personal appearance, said his presence at the Senate was unnecessary because the issues for which he was invited were not personal.

He said if he was to personally honour every invitation sent to the office of the IGP, he would have no time for his main responsibilities.

The IGP said he was allowed under the Constitution and Police Act to delegate responsibilities, including directing some of his subordinates to represent him where he is invited.

His position is contained in a suit filed by the IGP before the Federal High Court, Abuja through his lawyer, Dr. Alex Izinyon (SAN).

The IGP queried the propriety of the Senate’s decision to insist on his physical presence and its decision to enquire into issues relating to the charges filed against Senator Dino Melaye and on which he had been arraigned.

The suit marked: FHC/ABJ/CS/457/2018, has the President of the Senate and the Senate of the Federal Republic of Nigeria as defendants.

The Senate, in a letter dated April 25 this year, invited the IGP to appear before it in relation to the purported inhuman treatment of Melaye and killings in the country.

The IGP honoured the Senate’s invitation on April 26 this year, but was represented by the Deputy Inspector General of Police (Operations) and Commissioner of Police, Kogi State.

The Senate denied the two representatives of the IGP audience, but instead, rescheduled the meeting for May 2 and insisted that the IGP must honour its invitation in person.

The IGP, in a supporting affidavit, stated that his choice of the DIG (Operations) and CP, Kogi State was because they were conversant with the issues for which he was invited.

He argued that it was not compulsory that the occupant of the office of the IGP must honour every invitation in person.

The IGP noted that the invitation letter from the Senate, with the title: “Invitation to brief the Senate on the inhuman treatment of Senator Dino Melaye over a matter that is pending in court,” showed that the Senate was aware Melaye “is facing a criminal charge in a court.”

The plaintiff argued that he is not answerable to the defendants in respect of a case pending in court, but to the judicial arm of government, before whom the case was pending.

He added: “The said Senator Dino Melaye is facing a charge of criminal conspiracy and illegal possession of firearms before a court of competent jurisdiction in Kogi State.

“The heading of the said letter, which reads inter alia inhuman treatment meted to Senator Dino Melaye, who is a member of the 1st and 2nd defendants, clearly show the motive of the briefing.

“Once a charge is before a court of competent jurisdiction, it is only the judicial arm of government that adjudicates and disposes of the matter one way or the other, and not subject to the oversight functions in Section 88 of the 1999 Constitution as claimed by the defendants.

“Chapter Viii Rule 53(5) of the Senate’s Standing Order prohibits any reference to any matter in which any judicial decision is pending, in this case, the pending charge against Senator Dino Melaye before the court in Lokoja, Kogi State.

“There is no how the discussion on the Dino Melaye’s case by the 1st and 2nd defendants will not relate to or impact on the matter in court,” the IGP said.

The plaintiff therefore prayed the court to among others; restrain the defendants, any of their committees or agents from insisting that he must appear before them in person.

The IGP also urged the court to declare as unconstitutional, the defendants’ insistence that he appears in person before them or any of their committees is contrary to the combined provisions of Section 21d(1)(a) of the Constitution and sections 2, 5, 6 and 7(1) of the Police Act.

The defendants, in a counter affidavit, accused the IGP of using the court to shield himself from being scrutinized by the Legislature.

They stated that the IGP’s representatives were denied audience  because of “the weighty issues which requires clarification, as they touched on the very soul of our national existence and in order to ensure fruitful and meaningful deliberations.”

They prayed the court to reject the plaintiff’s prayers and dismiss the suit.

When the case was called on Thursday, Izinyon informed the court that it was scheduled for the hearing of the substantive suit, and that he was ready.

The defendants were not represented, but the court confirmed receiving a letter from the defendant’s lawyer, seeking a stand down till 12noon.

Although Izinyon agreed to wait, the trial judge, Justice John Tsoho elected to adjourn to another date on the grounds that a stand down was not feasible.

He adjourned to June 29 for the hearing of the substantive suit.

#NotTooYoungToRun: Only the Beginning for Youth Inclusion, Says Saraki