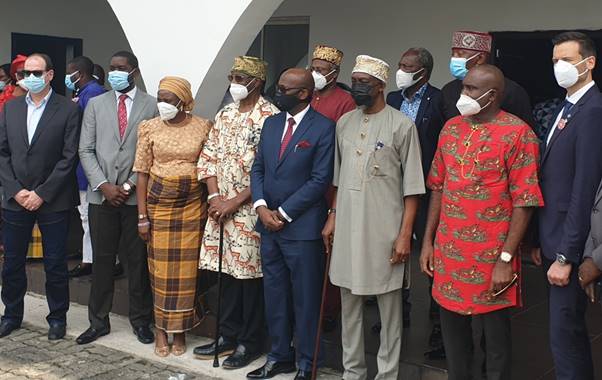 Engineering Construction Giant Partners NLNG for Reconstruction of Extinct Historical Consulate Building in Bonny Island
Nigeria’s leading and most reliable engineering construction company, Julius Berger Nigeria Plc, last Friday partnered Nigeria Liquified Natural Gas (LNLG) Limited, the nation’s gas production and management giant, to sign a Memorandum of Understanding (MOU)for the reconstruction of the historic but extinct Bonny Consulate Building.
The epoch-making MOU was signed at the Royal Palace of His Majesty, King Edward Asimini William Dappa Pepple III, CON, JP, Perekule XI, Amayanabo and Natural Ruler of the Ancient Grand Bonny Kingdom in Rivers State.
At the ceremony which was graciously hosted by the revered Bonny Monarch and was attended by a full compliment of the Kingdom’s Council of Chiefs ably led by the Chairman of the Council, a retired army colonel and highly respected community leader, Alabo Dagogo Wilcox, the erudite General Manager, External Relations and Sustainable Development of the NLNG, Mrs Eyono Fatayi-Williams commenced the proceedings and introduced the NLNG delegation as well as the Julius Berger team that attended the event.
While Tobias Meletschus, the Executive Director, Corporate Development of Nigeria’s most creative, dependable and trusted construction company, Julius Berger, represented the Managing Director Engr. Dr. Lars Richter and led the company’s delegation to the ceremony, the multiple award-winning Gas production and management giant, the NLNG, was led to the ceremony by its Managing Director, Tony Attah.
The Managing Director of the NLNG, Tony Attah, used the occasion of the MoU signing ceremony to thank Julius Berger for its “steady partnership and for joining hands to bring this dream alive”, adding that there is a Bonny-Dubai Vision planned and intended “…to upscale the prominence of Bonny and make it a major investment destination, diversify its economy from reliance on oil and gas to other areas such as tourism,, create strong infrastructural base and improve the quality of life of its people”. Attah further said: “…the signing of the MoU marks the consolidation of the NLNG’s true partnership with Julius Berger and Bonny Kingdom”
Speaking for Engr. Dr Lars Richter the engineering construction giant’s MD, Tobias Meletschus thanked the MD and Management of NLNG for their serious and worthy commitment to the partnership with Julius Berger for the joint CSR project for which both companies signed the MoU in Bonny. Julius Berger, he said, considers it “a great pleasure to extend our cooperation with NLNG – by partnering to reconstruct the Bonny Consulate building as a gift to the Grand Bonny Kingdom.” Meletschus added that: “It is especially fitting for Julius Berger to participate in this CSR partnership, as 2020 marks our own 50th Anniversary, which we have commemorated through a number of CSR activities across our project locations”. He further emphasised that Bonny Island has long been a key project location for Julius Berger, the company having first arrived for business on the Island over 20 years earlier, in the mid-1990’s, “as the first major contractor tasked to carry out infrastructural work for the NLNG plant … and have continuously been working on the Island and have reliably and successfully delivered a number of significant projects, no matter the challenge.”

Julius Berger, Tobias Meletschus said, remains confident that its history of serial good success and habitual reliability for project delivery is clearly headed for realisation once more in the ongoing project for the construction of the strategically important Bodo-Bonny Road, the first road link between Bonny Island and the the rest of the world. “This milestone infrastructure development project will go a long way towards the advancement of the Niger Delta and serve as a catalyst for the continued success of Bonny Island once completed”, he added.

Defining the Bonny Consulate Building as a project “woven into the history of the Ancient Grand Bonny Kingdom”, Meletschus said Julius Berger feels honoured to be partners for both the construction of both the Bodo-Bonny Road and the Bonny Consulate Building, adding that both projects would weave into the future of the Grand Bonny Kingdom “for the benefit of the Island and its communities”.

Meletschus on behalf of the management of Julius Berger, and specifically the Managing Director Engr. Dr. Lars Richter who regrettably could not be in Bonny for the ceremony, thanked the NLNG for their partnership and for their significant CSR contributions both for the funding of the Bodo-Bonny Road, and for the joint commitment towards community development through the reconstruction of the historical Bonny Consulate building.

Finally, Meletschus offered Julius Berger’s significant appreciation and thanks to His Royal Majesty, King Edward Asimini William Dappa Pepple III, CON, JP, Perekule XI, Amayanabo and Natural Ruler of the Ancient Grand Bonny Kingdom and the very good people of the Kingdom “for the continued trust and good cooperation over the many years.”

Earlier during the event, Alabo (Col.) Dagogo Wilcox, the Chairman of the Bonny Council of Chiefs in his remarks at the event, traced the history of the Bonny Consulate Building to between 1893 and 1894 when it was established by the British Government as the official court for the adjudication and resolution of disputes which arose from the commercial transactions in the then Oil Rivers Protectorate. A video presentation at the ceremony on the history of the building showed that it was officially dismantled in 1897 when the court of equity it housed was relocated to the new governmental administration headquarters in Port Harcourt.
Alabo Dagogo thanked both the NLNG and Julius Berger “for the companies’ major and voluntary corporate social responsibility initiative to reconstruct and restore the historical Bonny Consulate Building at its old site”, adding that “the worthy combined efforts and action by Julius Berger and the NLNG should encourage other corporate concerns in the Kingdom and the country in general to also meaningfully contribute in real developmental terms to their host communities”. Alabo Dagogo further celebrated the fact that “the signing of the MOU between these two commendably responsible corporate citizens, Julius Berger and the NLNG for the reconstruction and restoration of the Bonny Consulate Building will significantly restore the strategic status of Bonny as a world tourism destination”.
In his remarks at the MoU signing ceremony, the Bonny Monarch, His Majesty, King Edward Asimini William Dappa Pepple III, CON, JP, Perekule XI, commended both the Management of Julius Berger and the NLNG “for positively impacting the Kingdom in many ways of working fervently (with the Kingdom) to retain Bonny Kingdom’s status as a harbour of great value”. The King thanked Julius Berger for being a worthy partner, and assred the parties to the MoU a continued cordial relationship for the sustainable prosperity of both the Bonny Kingdom and businesses operating in the Island.
Prince Moses Duku, the Group head of the Media Relations Office and Engr. Ingo Edinger, Technical Manager also accompanied the Executive Director, Tobias Meletschus as part of the Julius Berger delegation for the MoU signing ceremony in Bonny Island.‘

OPINION: #ENDSARS AND THE JUDICIARY IN NIGERIA