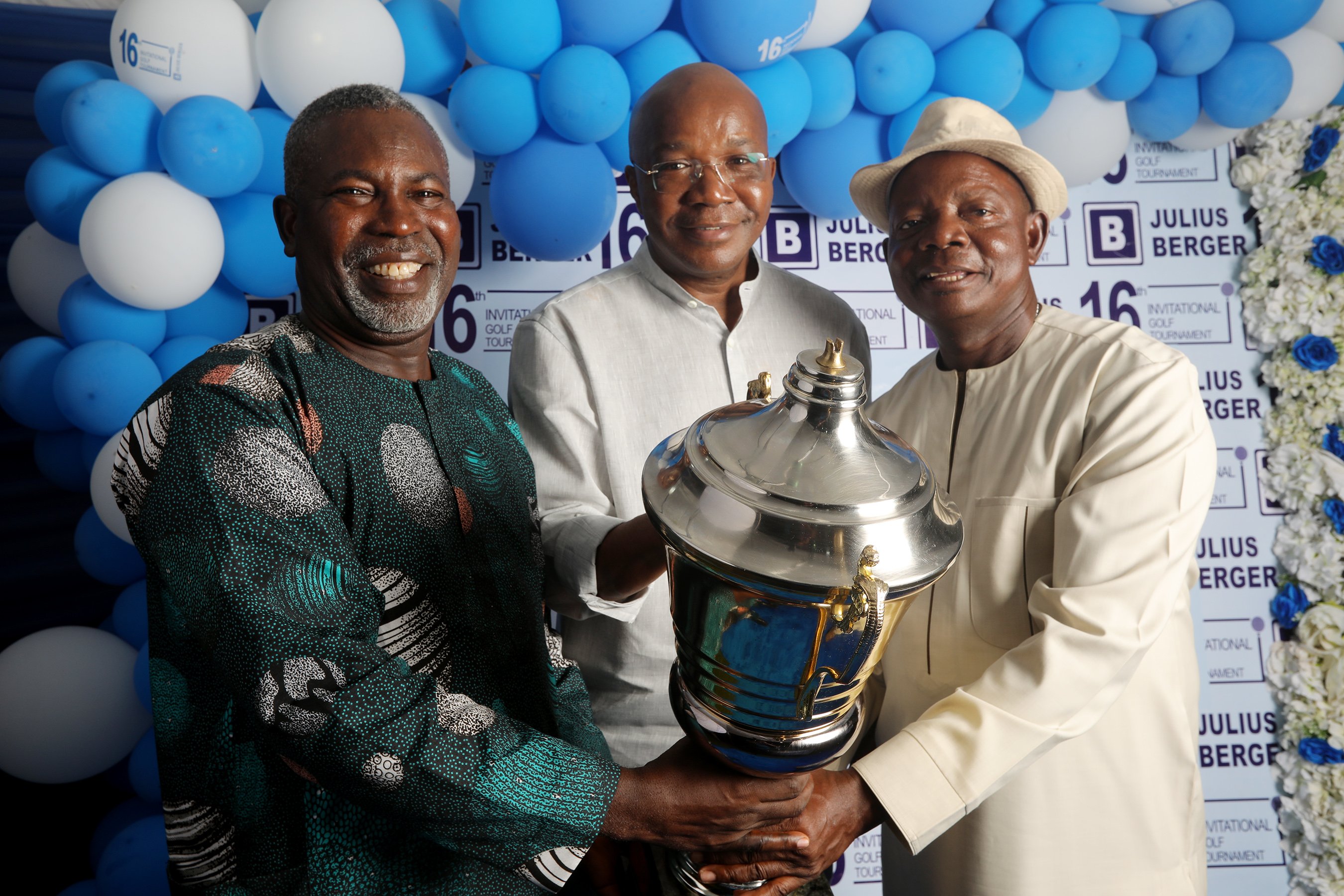 From, Osedebamen Isibor, Lagos
* as Gen. IBM Haruna pays emotional tribute to the departed Chairman of the company

It was an emotional night at the Dinner to commemorate the 16th Julius Berger Invitational Golf tournament, which held at the IBB Golf and Country Club Abuja last Saturday.

The tone for the evening was set by the Managing Director of the engineering construction giant, Engr. Dr. Lars Richter when during his speech he announced the passage of the iconic and highly respected former chairman of the corporation, Brig.-Gen. Mobolaji Johnson. His death which occurred in his Lagos home on 30th October, 2019 at the age of 85 was announced by his son Deji Johnson.

Dr. Richter recalled the immense contributions of Gen. Johnson to the development of Julius Berger Nigeria Plc. The Managing Director, Dr. Lars Richter recalled that the late former Chairman, , after his retirement as first Governor of Lagos state in 1975, became a Director of Julius Berger in 1979. Gen. Johnson later became Chairman of the company in the year 1996. He held the position till the year 2009 when he retired. Dr. Richter acknowledged the very productive, successful and impactful tenure of Gen. Johnson as Chairman on the business fortunes of Julius Berger, saying that his commitment and proactive hardwork laid a solid foundation for the growth of the company. Dr. Richter prayed for the peaceful repose and rest of the departed soul of Gen. Mobolaji Johnson, even as he said the corporation would solely miss the wise and ready advice departed former chairman.

A much more emotional tribute to the life and times of the late chairman of Julius Berger during the evening came from the Chairman of the Board of Trustees of the IBB Golf and Country Club, General IBM Haruna (Rtd.), a contemporary of Gen. Johnson in the military and political sphere. The sensitivity of the loss of Gen. Johnson was boldly written all over Gen. Haruna (Rtd.) as he reminisced on his shared and treasured times with the departed former JBN Chairman, both during their concurrent military and political service, as well as their enduring personal friendship and interest in the Golf game.

Gen. Haruna recalled that Gen. Johnson was also a pioneer member of the Board of Trustees of the prestigious IBB Golf and Country Club to highlight his interest and contribution to the game and the club while he lived. A moving moment occurred when a known and respected Julius Berger veterans at the event, led by Engr. Heinz Stockhausen and others rose from their seats to shake hands and pat Gen. IBM Haruna on his shoulder after the latter’s heart-felt tribute for the departed Mobolaji Johnson.In honour of the memory of Gen. Johnson, a moment of silence was observed by the Board of Directors and Executive Management of Julius Berger, the Board of Trustees and the Executive Committee of the Golf Club and all the participants and guests at the JBN 16th Invitational Tournament Dinner.

The JBN 16th Invitational Tournament itself was earlier described by the Club Captain, Mr. Sola Awoyungbo as the best organised ever at the club. He thanked Julius Berger Nigeria Plc for the Corporation’s consistent support and contributions to the development of the game and the club. He urged Julius Berger to continue to support the game.

During the evening dinner, prizes were presented to winners in different categories during the tournament. Auxiliary prizes were presented to four winning players. The longest drive for men was won by Bruce Spain who drove at 245 metres. Grace Ihonvwere won the longest drive for ladies at a 202 metres shot. O. Igwe won the prize for the nearest to the pin for men at 2 inch, while M. Nwoye won the prize for nearest to the pin for ladies at 8.4 metres.

The highlight of the presentations was when Mr. Mutiu Sumonu, CON, the Chairman of Julius Berger Nigeria Plc, was assisted by the Club Captain, Mr. Sola Awoyungbo, to present the 16th Julius Berger Invitation tournament trophy to the Overall winner, Colonel G. Onyejegbu (Rtd.). The overall winner of the Golf tournament thanked Julius Berger for organising the best tournament he played in yet, promising to be at the tournament again next year.

Amongst important guests at the event were a good number of first class chiefs and traditional rulers from the east who came in the company of His Royal Highness Igwe Peter Anugwu.

WHAT exactly is Godswill Akpabio and his cohorts up to in NDDC?