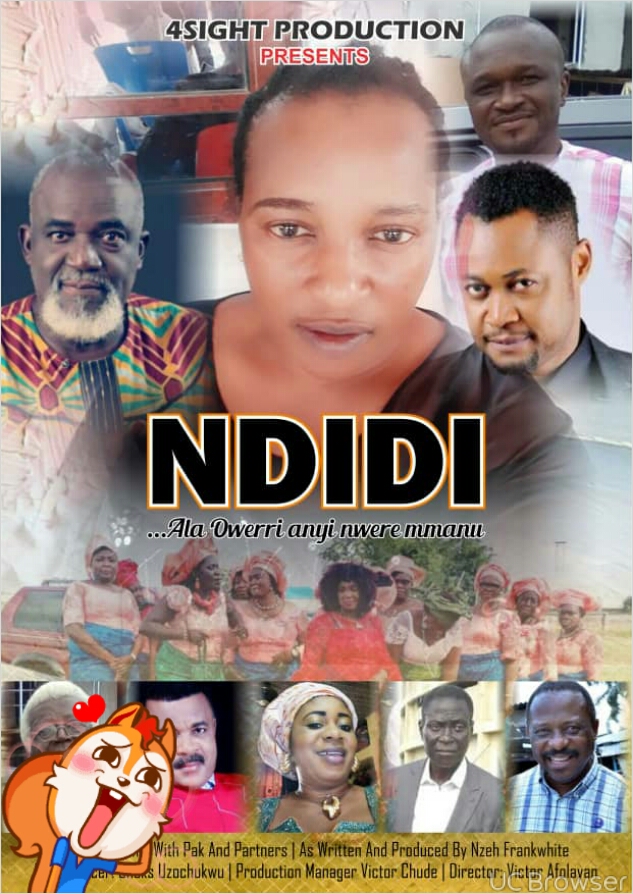 28
Share
The recent private screening of a brand new Nollywood movie is
currently generating a lot of excitement among the Owerri clan in Imo
State, South East Nigeria.
The movie titled ‘NDIDI’ which is presented in Igbo language,
substantially in Owerri dialect, is generating a lot of positive
currents among the indigenes, especially the privileged few that were
part of a private viewing session at the Fraser Suites in Abuja, where
some exclusive guests were given the unique opportunity of watching
and critiquing the highly anticipated blockbuster
Speaking to reporters after the viewing session, most of the guests
expressed satisfaction with the positive values promoted in the movie
and called on government to support their creativity. In their words;
Engr Chuks Anuforo, a popular contractor, known for the supply and
distribution of hospital equipment in Abuja, had this to say; “This is
a beautiful art of movie making from a son of the soil, the true
values of our women were properly captured in the movie, as against
the wrong narratives in the public about us before now. I am really
excited; I can’t wait to have a copy of the movie for my family”
concludes the chubby looking, dark complexioned Engr.
Next to speak to the media on his impression was Chief Young Toby
Ekechi, Managing Director/CEO First Generation Mortgage Bank, the
handsome looking former Local Government Chairman, was full of praises
for the producers of the movie and promised to promote it among all
indigenes of Owerri, Imo State and beyond, both home and abroad, his
words; “It was an amazing session…… the movie took me back home for a
moment and brought me back. The picture quality is excellent, the
story was exceptional, it took me to the end, to know how it was going
to end. I am very proud of the producer of this movie, he digged deep
to fetch the best of talents among our people, there were no fake
accents and mannerism, everyone was original. I praise their effort
and pray that they receive every support they deserve to go beyond
this stage, I am indeed excited”
On his part, Ibeto Amad-Obi, a former banker, Developmental
Consultant, was also full of praises for the promoters of NDIDI, in
his own words, he had this to say; “A beautiful storyline, well
presented without violence, nudity, occultism and all the other gory
sights that prevents me from watching most of our movies. The cast, an
excellent blend of the old and the new stars in Nollywood, indeed, I
am impressed with what I just saw. I can conveniently watch this movie
with my family, have a good laugh in between and take away the useful
moral lessons that are embedded in it”, asked if he was from Owerri,
he put up a mild smile and said, ‘I am from Emekuku, in Owerri……… yes,
I am from Owerri.
NDIDI, was recently shot on locations in Abuja and Owerri, and tells
the story of a young lady, NDIDI (the title character), played by
veteran Nollywood actress, Angela Phillips, whose decision to confront
her life challenges after her mother attempted to marry her off to her
village suitors against her wish, led her to adventure into the city
of Abuja in search of her child hood lover, Emeka, who had promised to
marry her and take her to the city. She encounters enormous challenges
in Abuja in her search for an elusive Emeka. She eventually finds
Emeka and met with fresh challenges, how all was resolved………………. Is in
the movie
The movie was written and produced by renowned journalist and
Hollywood trained filmmaker, Nzeh Frankwhite and Directed by Victor
Afolayan (son of late veteran comedian, Jagwuar), the movie also
features other seasoned Nollywood veterans like; Obi Okoli, Bruno
Iwuoha, Sydney Dialla, Vincent Opurum, Ayo Emmanuel, Emma Ayalogu,
among several others, and is billed to be premiered in Abuja for the
26th of September 2019
28
Share