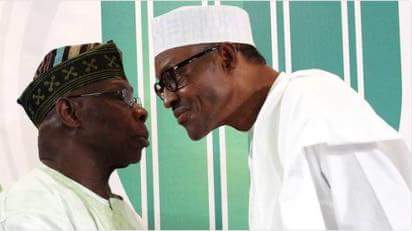 ON JULY 19, 20181:31 Reports by AMIN NEWS, Says Government is incompetent to stern the tide of killings, devastating Poverty, except giving one unrighteous and unacceptable justification after the other.

*** As Northern, Southern Leaders accuse government of Complicity in the on going killings

*** Resolve to back federalism and Restructuring

*** Call for a visionary and dynamic leadership that will effectively deal with our security and economic challenges, ensure good governance in the country

FORMER President, Chief Olusegun Obasanjo, yesterday lampooned the President Muhammadu Buhari led administration, saying that the government is at the moment is confused in addressing the mirage of problems and challenges confronting Nigeria as a country, just as he warned that if serious action was not taken, they would be the death knell to the country’s democracy. According to Obasanjo, the Buhari government has gotten to the end of its tethers and the nation at present is being left divisively and perilously to drift.

Speaking yesterday in Abuja as the Special Guest at a one- day Extra Ordinary Summit of Leaders and Elders of Nigeria convened by the Northern Elders Forum (NEF), Afenifere, Ohaeneze Ndigbo, Pan Niger Delta Forum, the former President while taking a swipe at the government, said that Nigeria, in recent times, has not been so divided along religious and regional lines as at today with what he termed, inexcusable killings and devastating poverty and with government’s wringing hands and apparently incompetent to stern the tide except giving one unrighteous and unacceptable justification after the other. Meanwhile, Elders and leaders from the Six- geo political zones of the country have accused the government of lacking in the capacity to arrest the drift towards a state of anarchy that looms in the country as a result of the security challenges in the country. The leaders and Elders who noted that there appears to be palpable government complicity in the killings going on around the country, said however that the killings have claimed 3,500 lives in 2017,a figure that could be much higher in 2018.

The leaders from the North, East, South and Middle Belt at the end of the summit have resolved to put in place a template on the issue of Federalism and Restructuring in Nigeria. Speaking further, former President Olusegun Obasanjo who was represented by the former governor of Osun State, Prince Olagunsoye Oyinlola, said that the time has come for the nation to be saved. Oyinlola who read a prepared letter from Obasanjo to a Co- Convener of the Summit and Chairman of the Northern Elders Forum, NEF, Professor Ango Abdullahi said that the former President was Chin.

The letter read, “When Yinka Odumakin conveyed your message to me concerning this meeting initiated from your end to dialogue on immediate and pressing issues of interest to all of us as Nigerians, I called you on telephone to tender my unreserved apologies for my inability to be personally present which would have been my desire but for a long-standing appointment in China which coincides in time with this meeting. You were kind enough to agree that I should send somebody to represent me, Prince Olagunsoye Oyinlola will stand in for me. “When you kindly paid me a visit a couple of weeks ago, we deliberated on the danger to our democracy, our common identity, our commonality of purpose. Our dream and our unity in diversity. We lamented the harm that the present Administration of President Muhammadu Buhari, by his action and inaction, has done and is doing to our commonwealth and our common heritage. Nigeria in recent times, has not been so divided along religious and regional lines as at today with inexcusable killings and devastating poverty and with Government’s wringing hands and apparently incompetent to stem the tide except giving one unrighteous and unacceptable justification after the order. The obvious indication is that the Government is seemingly confused and has got to the end of its tether and the nation is being left decisively and perilously to drift. Earlier last week, I noted in a speech some undesirable elements being allowed and being introduced to our democracy by this Administration. If these are not stopped, they could be the death knell of our democracy. “In spite of these unfortunate Situations created by the Government, my contact and consultation, which brought me face- to – face with people alights and frustration, also gave me hope. People are not ready to give up in despair and leave their fate and their present and future in the hands of debt leadership for their lives to be ruined. I see common concern acres “we nation irrespective of tribe religion region language and soot: tending that the situation should be retrieved and the nation should be saved. ” My dear brother and friend, Ango, this is why I strongly, believe in this meeting which is beyond politics, beyond religion beyond economics, beyond status, is for saving the heart and soul of our nation through nonpartisan and all-embracing participation to dialogue for our present and our future. Because we do not dialogue enough, most of us live in ignorance of one another, burdened and influenced by received prejudices, biases and twisted history. The time has come when we should constantly dialogue among ourselves at different levels to inform, educate and enlighten ourselves and dispel bad influences. A lot of misgivings, misunderstanding, misperception, misrepresentation, erroneous beliefs and outdated ideas and concepts can be cleared and a lot can be achieved. “This “Dialogues Amongst Ourselves”, which are starting today, must not be a once-and-for-all affair. We must dialogue often for our collective progress. And I have no doubt that this first one will be a huge success. We are in dialogue because we are concerned for our country. I will hold myself ready to lead the holding and hosting of the next one at our end after due consultation with you and with others. Dialogue removes tensions, clears the air, leads to sharing views and to understanding one another’s point of View. It promotes concord, harmony, cohesion, peace, security, inclusiveness, development and progress. It enthrones justice and equity and removes impunity. ” I wish you a very successful Dialogue and meeting. I am with you in spirit. Let us march on and forward in dialogue and progress.”

The Communiqué read, “A one-day Summit of National Elders and Leaders of Nigeria convened by the Northern Elders Forum (NEF), Afenifere, Ohaeneze Ndigbo, Pan Niger Delta Forum, held on 18′” July, 2018. The goals or the Summit Included the following: to review the alarming rise and spread of killings“ and general insecurity of lives and property in Nigeria; to identify possible causes of the current state of insecurity; iii. To contribute to finding short and long term solutions to the killings and pervasive insecurity; “To facilitate in forging national consensus on the key pillars required for building national security unity and survival, in a just and democratic country. ” To underscore the failure of public policies which have resulted in enormous hardship to vast segments of the Nigerian population. “The Summit observes as follows:

(1) That the general state of insecurity and incessant killings in Nigeria have escalated in recent times with several communities at the mercy of marauding killers. This has reached totally unacceptable proportions that gravely endanger the peace, unity and development of the country. That the security of lives and property is the cardinal responsibility of government. And the present Administration had identified security as one of the three pillars of its change agenda. However, the country’s entire security and law and order assets appear incapable of arresting the drift towards a state of anarchy. Summit therefore observes with regret the negation of this Administration’s commitment and undertaking to provide security to all Nigerians.

(2) That the country now witnesses unprecedented incompetence and enthronement of mediocrity in dealing with the horrendous spate of killings and general insecurity across the country.

(3) That in the eyes of many affected communities, there appears to be palpable government complicity in the killings going on around the country. These killings claimed more than 3,500 lives in 2017, a figure that could be much higher in 2018.

(4) That the number of internally displaced persons has risen to about 4 million from 1.5million in 2015.

(5) On the issue of the national economy, Summit notes with dismay the mismanagement of an economy, already approaching recession by 2015. Today, the economy is characterized by significant loss of output, massive youth unemployment, a rising level of poverty, instability, and irregular migration of skilled and unskilled labour. In fact, according to the World Bank, the unemployment rate in Nigeria has increased despite its purported exit from recession in 2017. This is a national embarrassment and a disgrace to a country that is endowed with abundant resources. Summit further notes that, according to World Data Laboratory, Nigeria overtook India this year as the poverty capital of the World. In addition, Nigeria’s ranking on the Human Development index was one of the lowest in the World standing at 152 out of 188 countries surveyed in 2017.

(6) Summit also notes with great concern that despite the present Administration’s war against corruption, the highly acknowledged global monitor of corruption perception, Transparency Intentional, has adjudged Nigeria to be more corrupt today than it was in 2015. It is disturbing that Nigeria has in the last 3 years degenerated from the 136‘” to the 148‘” place out of 180 countries surveyed for corruption perception in 2018.

(7) Summit observes that the kleptocracy nature of governance and appointments to public offices and institutions, as well as the carefree attitude of government to citizens’ discontent have resulted in breeding deep divisions and inter-communal distrust. This is a development that is of grave concern to all Nigerian patriots.

(8) Furthermore, Summit observes with alarm the flagrant abuse of, and disrespect for, the rule of law, as well as the systematic violation of our electoral processes. These infractions are steadily eroding public confidence in our hard-earned democracy.

Earlier in his Welcome address, former Permanent Secretary, Dr. Hakeem Baba Ahmed said that security, law and order agencies have not been held accountable for the disastrous collapse of the nation’s security challenges, just as he said that the nation was potentially exposed to more violence as the police has failed in its basic responsibilities, the military is stretched beyond its capacities and the challenges of the forthcoming elections will divert resources and attention from basic security responsibilities. Baba – Ahmed who is the Chief of staff to the Senate President, Dr.Bukola Saraki asked President Muhammadu Buhari too show firmer and more decisive leadership in dealing with alarming scale of killings and other violent claims. It is the responsibility of leadership to secure the citizen, no matter what the sources or nature of threats to his life and property are.