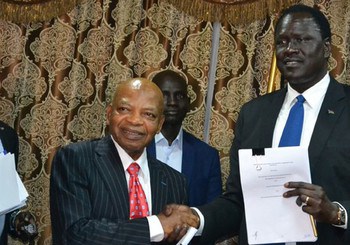 Already, the firm has completed the award of the contract for the construction of two primary schools to be located in Yirol and Rumbek, two communities located in central South Sudan and northwest of Juba, the country’s capital.

Estimated at over $800,000, the project for the construction of the schools will be executed by local construction company Dynamic Supplies and Construction Limited, in line with Oranto’s policy to significantly engage local human and material resources in all its activities in the Republic of South Sudan.

“We are delighted to be working with such an investor as Oranto in the development of South Sudan’s oil sector,” said Petroleum Minister, Mr Ezekiel Lol Gatkuoth. “Oranto has proven to be a reliable partner, committed to support both the growth of South Sudan’s local content and the socio-economic development of our communities.”

The construction of the state-of-the-art schools signals a further boost to value addition to the people of South Sudan from their oil and gas resources as championed by Oranto, against the backdrop of the various peace initiatives being embarked upon by the Government of South Sudan.

“The construction of these two schools is a reflection of Oranto’s engagement to invest in social infrastructure in all areas where we operate in Africa,” declared Prince Arthur Eze, Founder and Executive Chairman of Oranto Petroleum. “Oil has to benefit all citizens and education is key to development. We are only going to see true peace and development in Africa when we leave no child behind and continue to invest in our human resources. I am thankful that I have been blessed and I have a chance to bless others.”

Oranto signed its EPSA with the Ministry of Petroleum in March 2017, committing to the development of the 24,415-square kilometre acreage.

Following a competitive tender process, geophysical specialist BGP was selected to perform an airborne gravity and magnetic survey of the contract area, Block B3.

Oranto completed data acquisition on Block B3 in the second quarter of 2017 and is currently in the data interpretation stage. The block is believed to be highly prospective, with productive parts of the Muglad Basin to the northwest and estimated reserves in place of more than 3 billion barrels of oil.

Oranto Petroleum is one of Africa’s largest privately owned exploration and production companies. The company owns 22 oil and gas licenses in 11 jurisdictions, including producing assets in Nigeria and Equatorial Guinea.