THE SHORTEST WAR IN HISTORY 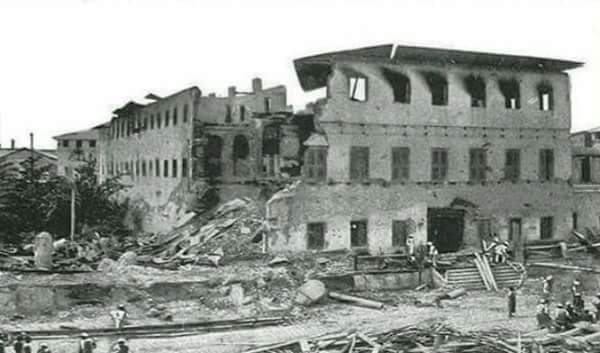 The Anglo-Zanzibar War was a military conflict fought between the United Kingdom and the Zanzibar Sultanate on August 27, 1896. The conflict lasted between 38 and 45 minutes (many literature quotes 38 minutes), marking it as the shortest recorded war in history.

The immediate cause of the war was the death of the pro-British Sultan Hamad bin Thuwaini on August 25, 1896 and the subsequent succession of Sultan Khalid bin Barghash . The British authorities preferred Hamud bin Muhammed , who was more favourable to British interests, as sultan.

In accordance with a treaty signed in 1886, a condition for accession to the sultanate was that the candidate obtain the permission of the British consul, and Khalid had not fulfilled this requirement. The British considered this a casus belli and sent an ultimatum to Khalid demanding that he ordered his forces to stand down and leave the palace. In response, Khalid called up his palace guard and barricaded himself inside the palace.

The ultimatum expired at 09:00 East Africa Time (EAT) on August 27, by which time the British had gathered three cruisers, two gunboats, 150 marines and sailors, and 900 Zanzibaris in the harbour area. The Royal Navy contingent were under the command of Rear-Admiral Harry Rawson while their Zanzibaris were commanded by Brigadier-General Lloyd Mathews of the Zanzibar army (who was also
the First Minister of Zanzibar).

Around 2,800 Zanzibaris defended the palace; most were recruited from the civilian population, but they also included the sultan’s palace guard and several hundred of his servants and slaves. The defenders had several artillery pieces and machine guns, which were set in front of the palace sighted at the British ships. A bombardment opened at 09:02 set the palace on fire and disabled the defending artillery. A small naval action took place, with the British sinking the Zanzibari royal yacht HHS Glasgow and two smaller vessels, and some shots were fired ineffectually at the pro-British Zanzibari troops as they approached the palace.

The flag at the palace was shot down and fire ceased at 09:40. The sultan’s forces sustained roughly 500 casualties, while only one British sailor was injured. Sultan Khalid received asylum in the German consulate before escaping to German East Africa (in the mainland part of present Tanzania). The British quickly placed Sultan Hamud in power at the head of a puppet government. The war marked the end of the Zanzibar Sultanate as a sovereign state and the start of a period of heavy British influence. #HistoryVille

Picture shows the Sultan’s harem after the bombardment.

You can borrow our looted Benin Bronzes, but you must give it back to us’ –…