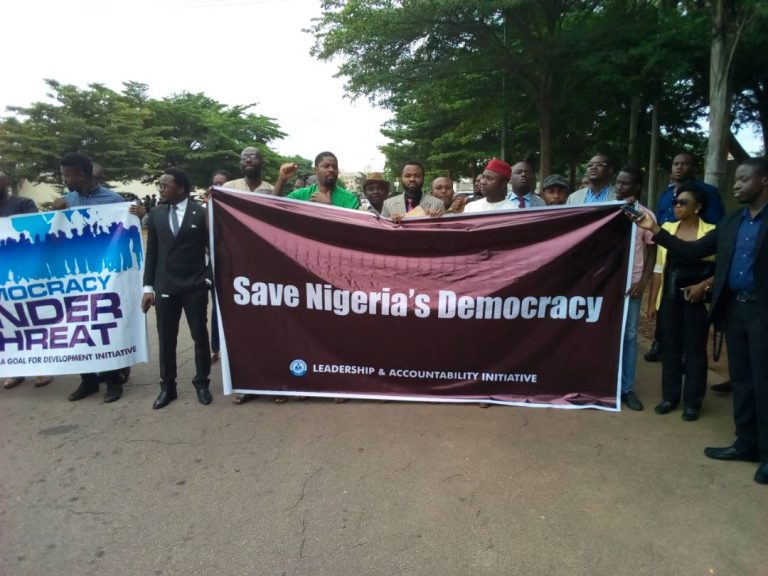 Abuja – A Non-Governmental Organisation (NGO) – The Leadership and Accountability Initiative, has petitioned President Donald Trump of the United States (US) over what it described as the worsening political situation in Nigeria.

It particularly took exception to the conduct of the Ekiti governorship election which took place on Saturday which it described as a sham.

The group stormed the United States Embassy located at the Central District of Abuja carrying and displaying different banners as early as 10:00am.

Some of the banners had inscriptions such as “General Buhari Respect the Rule of Law!” “Let the Will of the People Prevail.” “Democracy Under Threat,” “Let Ekiti People’s vote Count” and “Save Nigeria’s Democracy” among others.

In the petition titled; “Saving Nigeria’s Democracy from Total Collapse” which was received by one of the officers in the US Embassy, the group accuse the President Muhammadu Buhari-led Federal Government of constant and deliberate violation of provisions of the Nigerian constitution specifically human rights.

It specifically cited the raiding of the Abuja home of former Governor of Sokoto State, Alhaji Attahiru Bafarawa as well as that of Akwa Ibom State Governor’s Lodge in Uyo, the illegal incarceration of the former Chief Security Officer to former President Goodluck Jonathan, late Gordon Obuah by the Department of State Services (DSS).

Others include the detention of former National Security Adviser, Colonel Sambo Dasuki in spite of several judgments for his bail and the Leader of the Islamic Movement of Nigeria (IMN), Sheik Ibrahim El Zakzaky, adding that the President Buhari government is currently supervising a systemic ethnic cleansing of Christian minorities by Fulani herdsmen in Southern Kaduna, Benue, Plateau, Taraba, Zamfara, Sokoto, and Adamawa States.

While presenting the petition to the representative of the US Ambassador to Nigeria, Head of Mission, Leadership and Accountability Initiative, Pastor Nwazuruahu Shield said members of the group like millions of Nigerians are concerned that if nothing is urgently done, there might not be Nigeria after 2019 elections.

In his words; “We saw what happened in Ekiti on Saturday. That is not democracy. How can men in uniform supervise the snatching of ballot boxes? You cannot take the only power that the citizens have which is the power of the PVC. You cannot assault a sitting governor. We are in a democracy.

“We are at the embassy with a letter of passionate appeal to President Donald Trump from the people who see the United States as a bastion of democracy and a nation that teaches others how democratic rules should be.

“US is a different entity on its own and we are a different country of our own. But we know that there is what is called international community concern where there are little, little threats that can threaten peace and security anywhere in the world.

“Everything done here, we have pictures, we have examples, we have date and time. We have articulated the failings of this government and what we are doing today is that tomorrow, if anything happens, the world will not say we kept quiet.”

The group assured that they would take their disapproval of happenings in Nigeria under President Buhari to the United Nations, the European Union and all embassies and missions in the country with a message for them to speak to Aso Rock.

RE: Fraud: Abuja Hotelier,Pastor remanded in Prison *The true side of the story