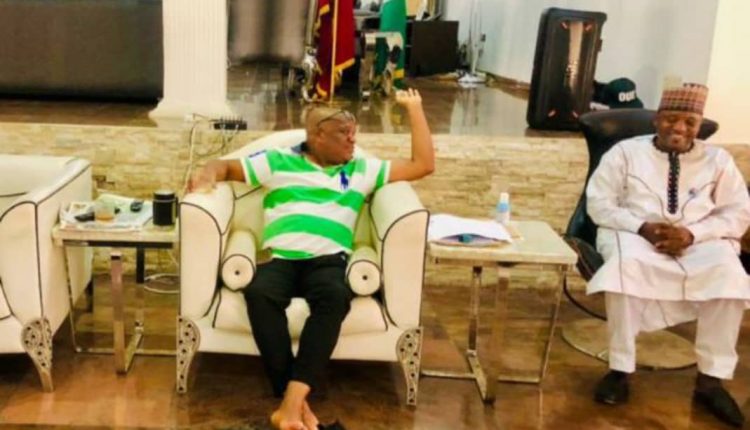 A political preasure group known as Orji Uzor Kalu Grassroots Movement has indicated their intention to dump the All Progressive Congress (APC) following non inclusion of their principal and former Governor of Abia State, Senator Orji Uzor Kalu in the APC campaign activities by the Presidential Campaign Council (PCC)

Addressing newsmen at their national headquarters in Abuja, the National Chairman of the group Alhaji Muritala Mohammed alias ten ten explained that the group which has over 3.8 million registered members nationwide is not comfortable with the neglect of the Senate Chief Whip by the PCC and consequently is considering to call it a day and part ways with APC.

According to ten ten, the group which was floated to promote Senator Kalu as a detribilsed leader in Nigeria with capacity and experience to serve at all levels. He noted that Kalu holds ace as a detribalised leader who as governor of Abia State gave a northerner appointment in his cabinet, built a gigantic Mosque for Muslim community in Abia State and prevented a reprisal attack against northerners in Ab a and Umuahia during the crisis between Igbo and northerners in Kano

He went further to explain that the group has already endorsed the Presidential candidate of APC Ahmed Bola Tinubu but may likely withdraw the endorsement if the PCC doesn’t recognize the Senate Chief Whip and include him in the campaign activities.

He added “Our principal is a former governor and a sitting top.ranking Senator with millions of followers nationwide so why should the PCC ignore him and not engage him in the campaign activities by the party he has contributed in nuturing? He should be included in the campaign by the PCC otherwise we are going to exit from APC”