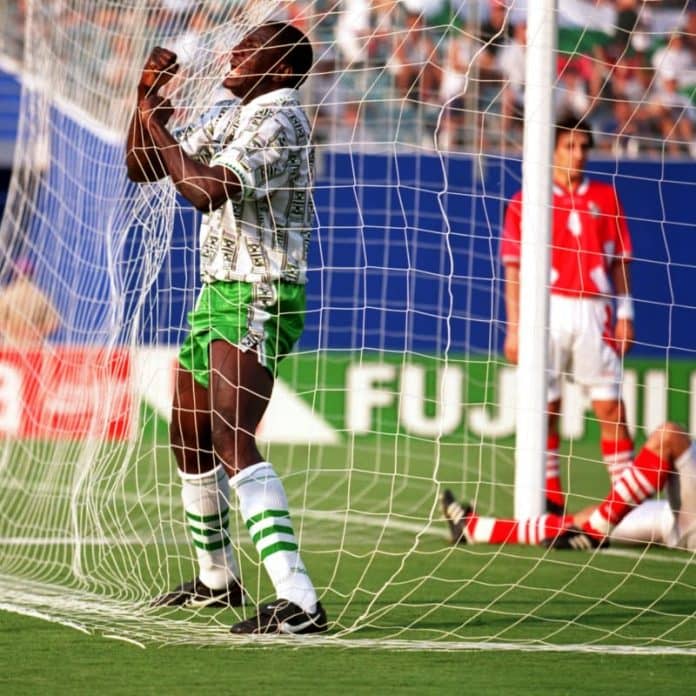 8 Years Anniversary: Rashidi Yekini’s Lawyer Reveals The Untold Story of How He Died, His Family Roles

Rashidi Yekini’s Lawyer Reveals The Untold Story of How He Died, His Family Roles

Lawyer to the 1993 African Player of The Year, Rashidi Yekini, Barrister Jibril Mohammed said that the former Eagles’ striker was forcefully abducted in his home by marabout and died few days after the abduction.

Today marks the eight-year anniversary of the passing of Nigerian icon Rashidi Yekini.

He remained the highest goal scorer for.the Eagles and netted Nigeria’s first-ever goal in a World Cup. His celebration, crying while holding the goal’s net, became one of the iconic images of the tournament.

Revealing the ordeal, lawyer, Jibril Mohammed alleged that his mother and siblings masterminded his abduction, adding that Yekini’s mother led the marabout to his house where he was abducted shortly before his death.

Recounting the ordeal on Kwara Sports Arena WhatsApp platform on Sunday, he insisted, that Rashidi was murdered by the marabout engaged to abduct him for treatment after sensing he was mentally unstable. He said he came to the conclusion that decease family masterminded his death because the siblings came to his office to tell him everything and apologised.

According to him, there were three foiled attempts to abduct him but his intervention through the then Oyo state Commissioner of Police, Bolanta made it impossible for the family to successfully abduct him.

“The siblings, who masterminded his abduction were present and they later told me everything. I later got to know after the 40 days Fidau I personally organised for him. Infact, Rafiat came back, personally to my office to apologise to me.” Jibril said.

“I was not even aware that he was abducted until they announced his death. I challenged them about Yekini’s death because I believe strongly that he was murdered by those marabout the family engaged to abduct him, In the same vein, I had no moral support to challenge the family to disclose.” He added.

He said it took the intervention of former Oyo state Commissioner of Police to foil the first three attempts by the family trying to abduct him.

“There were like three other attempts to abduct him, which I was able to foil before they succeeded. I was lucky to have Baba Adisa Bolanta as the commissioner of Police, Oyo state command that time. He intervened in one of those occasions they tried to take him away, after I alerted him. He summoned everyone, including the family members and the DPO in charge of the area to his office, where he gave a standing order for his protection and warned his family not to move near his house.

“However, it’s instructive to know that his immediate younger sister and second brother; Rafiat and Hakeem are both late now.” He concluded.

Scoring 37 goals for Nigeria in 58 appearances, Yekini was the national record goalscorer. He was part of the team that participated in the 1994 where he netted Nigeria’s first-ever goal in a World Cup , in a 3–0 win against Bulgaria , his celebration after scoring, crying while holding the goal’s net, became one of the iconic images of the tournament and the 1994 FIFA World Cups .

Additionally, Yekini helped the Super Eagles win the 1994 Africa Cup of Nations in Tunisia where he also topped the goal charts and was named best player of the competition. He also
participated at Olympic level in Seoul 1988 .