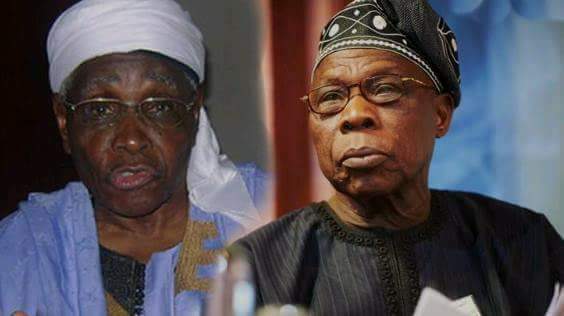 The spokesman for the Northern Elders Forum, Prof. Ango Abdullahi, has met with former President Olusegun Obasanjo in his home in Abeokuta, Ogun State, to strategise for the 2019 presidential election.
The meeting, which held last Thursday between the NEF Chairman, Ango Abdullahi, and Obasanjo, was meant to agree on a possible consensus candidate, a source informed The PUNCH on Sunday.
It was learnt that the parley, which also had in attendance two other NEF members, deliberated about a suitable northern candidate that could attract massive support from all parts of the country in the 2019 elections.
It was learnt that the meetings were parts of the moves to unite elders of the six zones in the country to present a common front in the 2019 presidential election.
Investigations showed that the meetings were also aimed at proffering solutions to security challenges in the country.
The PUNCH gathered that the participants discussed the future of the country under a dynamic leader and how the NEF could partner other stakeholders across the country to ensure the election of a new candidate other than President Muhammadu Buhari.
The source said, “Ango Abdullahi actually visited Obasanjo in Abeokuta along with two other men. Their discussion, as you rightly guessed, bordered on the 2019 elections and the need to field a dynamic candidate who would be acceptable to the North and other regions of the country because the North is no longer comfortable with the current leadership.”
Also, a top politician who wished to remain anonymous said Abdullahi had another meeting with some elders of the pan-Yoruba group, Afenifere.
He said, “Ango Abdullahi has met with Obasanjo and Afenifere as part of the efforts to save this country. They discussed 2019 elections and the recent killings which have mostly affected Nigerians living in the North.
“I think there is a general agreement that things are not going fine and something needs to be done because both North and South are feeling the effects of the bad governance.”
When contacted, Abdullahi said he attended both meetings alone. In a telephone interview with one of our correspondents in Abuja on Sunday, he said the meetings were parts of consultations ahead of the 2019 general elections.
Although he declined to go into details of the separate meetings, he said issues such as Nigeria’s security and events leading up to the 2019 general elections formed part of discussions.
In response to a question on the essence of the meeting he held with the former President, Abdullahi said, “I just wanted to see him (Obasanjo). Before then, I also met with elders of Afenifere; it is already in the papers.”
Asked what the essence of the meeting was, he simply said, “Consultations.”
He was asked if he was running for the Presidency, he responded, “I am not. I did in the past when I was much younger. I am an old man now. I don’t think I can stand the rigours of the office of the President. I have passed that age now. We are just making consultations around the country.”
-Punch