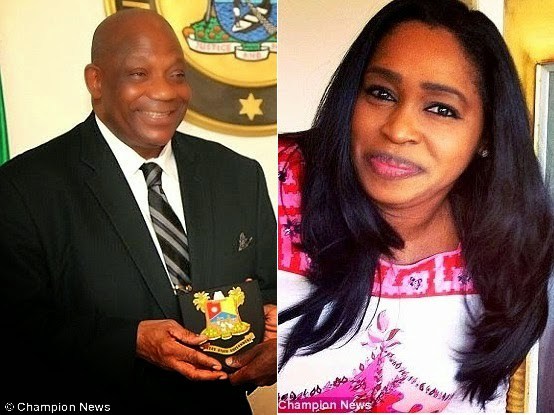 Billionaire leader of Urhobo Progressive Union (UPU), Olorogun Moses Taiga and his wife, Yinka Taiga, have lived on a tale for over fifteen years – the ‘miraculous birth of quadruplets’.

The Taigas claim that Yinka got pregnant and was delivered of quadruplet thanks to a miracle she experienced during the Annual Holy Ghost Congress 2000 of the Redeemed Christian Church of God (RCCG) tagged “Open Heaven”.

She claimed and published in the media that she had been persuaded by her friends who assured her that God will meet her need and answer her prayers and just two months after attending the Holy Ghost Congress, she discovered that God had indeed answered her prayer, when she found herself pregnant in the early 2001. She then proceeded to the United States to be delivered of her babies.

However, the truth has been revealed as Nneka Ogbedo, the mother of Moses Taiga’s twin daughters (born just before Yinka’s acclaimed quadruplets), has revealed that the tale of the quadruplet is a big lie meant to deceive the public following several defamatory publications about her and her twins.

She alleged that Moses and Yinka Taiga are not the biological parents of the acclaimed quadruplets contrary to what they had led the world to believe. She also alleged that the children are not biologically linked with each other except for a set of twins.

Nneka stated that the four children were given birth to by three different birth mothers, none of which was Yinka Taiga.

She revealed that Yinka, who was not resident in the USA but usually stayed at The Sutton in New York travelled to Los Angeles to procure these children, and returned immediately after to New York.

In order to verify these claims, THEWILL got copies of the birth certificates of the quadruplets (which are public documents and can be accessed by interested persons upon application to the birth registry in Los Angeles) and discovered that a set of twin boys were born between 8.23 am and 8.31a.m respectively and the other two children were recorded as single births and were born at 12.04 pm and 9.25 pm all on the same day (11-21-2001) at the Cedars Sinai Medical Center, 8700 Beverley BLVD, Los Angeles, USA. Howard Mandel MD, attended to the births.

So by the certificates, Yinka started taking the delivery of the children, from 8a.m to 9.25 pm! How is that possible?

THEWILL spoke with two Medical Doctors (who preferred not to be fully named) to understand how possible it was for a woman to have a set of twins at 8am, another child 4 hours later and a fourth child some 13 hours after the first delivery and 9 hours after the second delivery.

“This is very unlikely. Yes there have been very rare cases of birth intervals but this particular case is impossible,the first stated.

“This interval is too long to be true. Maximum we could wait for is about 30 mins to one hour. If the baby is not forthcoming, then you have to go in and bring the baby out, by a Caesarean section.

“Nobody waits that long. Even if the babies weren’t discovered during the scan, as soon as the first set are delivered, you would notice that something is still there and quickly make provisions for that delivery.”

“In my many years of medical practice, I hear all sort of tales but I haven’t heard of one like this,” the second added.

“So let’s assume the second birth happened, the doctor having missed it would do everything to be sure that the birth has been completed to avoid missing another baby. So the third birth is definitely untrue.

“We are talking about 13 hours after! She would have been taken out of the delivery room, stitched up, cleaned up and started seeing her babies.

“I doubt if any woman can survive such without a CS (Caesarean Section). The patient would most likely not survive unaided. The pain… to go through such, most unlikely.”

Nneka stated that there are bank statements showing payments and transfers made to the many players and many more interesting information are in documents she was privileged to have during her court proceedings in the Uk.

Yinka continued to live in her lies while the unsuspecting public is being fooled by the tale especially the church where the ‘miracle’ took place. In fact, there was a big thanksgiving service where she also shared her ‘testimony’ in a big RCCG parish in Victoria Island.

THEWILL spoke with a pastor of the RCCG questioning if the church has a process for verification of miraculous claims attributed to it. Choosing to be anonymous, the pastor, who heads one of the big RCCG provinces in Lagos said:

“Millions come from all over the world for our Holy Ghost Night and Congresses. So first, we can’t exactly verify who attended and who didn’t. Now we even have the online worshippers which increases the number of participants.

“The truth is, miracles are real and they happen but of course, some people would try to take advantage of loopholes to achieve their agenda.

“While we try verify these claims and testimonies, there is just no way we can ask everyone to prove it. For those who testify in camps and whose testimonies are used in our bulletins, there is a process of verification.

“But for people like this who want to play smart, they would actually avoid going through the process and just go out using the church’s name to help their claims. We try our best but some things are just beyond our control. I will only advise them to confess and speak the truth.

“For the church where they had their thanksgiving, I’ll ask the pastor there some questions although the resident pastor at that time is now late so the new pastor there may not have all the details.

“There is nothing wrong in adopting children so why lie about it. You see, this is why we came up with new medical tests for intending couples. So that no body is deceiving the other person and also so that we can verify miraculous interventions.

“And if they think they have proof, because they have mentioned this church, then, they should show it or simply confess. It’s not too late for God to bless them with children but they have to repent.”

“Moses owes the Almighty God, the twins and herself profuse apology for being so ridiculous as to initially deny paternity of the children he begged me to have for him. I have been doing fertility treatments and IVF and ICSI with Moses for as long as I have known him.

“The DNA result of my Children done as far back as 2004 and presented to the UK court shows that Moses was 99.9% the father of the twins and that I was their mother.

“Yinka has disparaged me for too long calling me Moses’ mistress and all sorts of unprintable names. I chose to keep quiet but she never stopped her harassment. It is laughable to say Moses did not marry me. We got married before he ever met Yinka.

“I was the one who went to court in the United Kingdom where I reside, to ask him for the dissolution of our marriage on the ground of intolerable behaviour, Moses also filed for a divorce here in Nigeria at Uvwie Area Customary Court on the 4th of March, 2003 on the grounds that I refused to change my maiden name to his name and that I was travelling out of the country without his permission among others. He also made claims for custody of my twin daughters who were barely two years old at the time, amongst other ridiculous accusations.

“My question is simple – Can you divorce a woman that you claimed you did not get married to? Or can you make claims for custody of children that you earlier said were not yours.

“I had my own issues with Moses Taiga. It’s sixteen years since I walked out on him and he’s refused to let go. Moses’ ego has been brutally bruised for walking out of his life, I encourage him and Yinka to tell the truth, face their demons and desist from harassing my daughters with false publications.”

Efforts have been made to reach the Taiga’s for a response but all have proved abortive thus far.