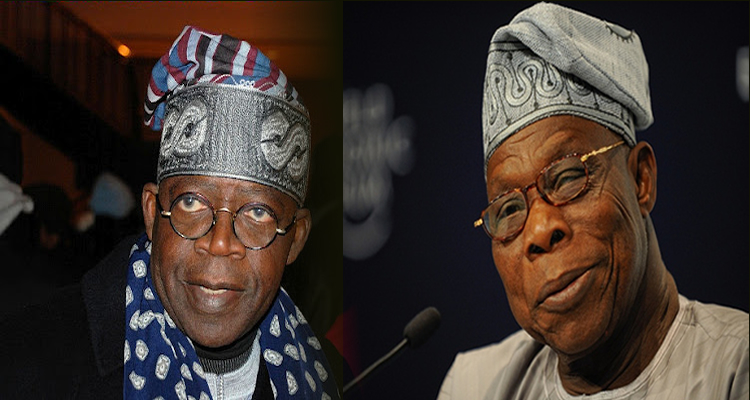 The national leader of the All Progressives Congress, Asiwaju Bola Ahmed Tinubu said that former President Olusegun Obasanjo has no moral justification to ask President Muhammadu Buhari not to re-contest the presidency in 2019

Tinubu spoke Sunday night at the National Convention of the party in Abuja.

He described Obasanjo as” a busy body,” saying that he was not a member of the APC nor any other political party having torn his Peoples Democratic Party (PDP) membership card publicly.

Obasanjo had in January, asked President Buhari not to seek re-election in the forthcoming 2019 presidential election.

“This man has the temerity of writing a letter.

“What is your business, busy body? Unfortunately, he has torn the card of his party, so he does not have one anymore, ”Tinubu noted.

He added that he was happy to be in the APC and not listening to those who advised him against associating with President Buhari.

He thanked Buhari for his tenacity and commitment to fight corruption in the country and for working hard to develop the country.

According to him, the President Buhari-led APC has adhered more to the tenets of internal democracy more than any government in the past.

This, he said, was showed at the party’s just concluded National Convention.

“We thank you that you have offered yourself to re-contest the presidency in 2019, you must run, and you will win, ” he said.

“We have changed leaders of our party: not at gun point, ask Audu Ogbeh. Thank God we have been able to stop looting and abuse of power,” Tinubu said.

“Badaru, you have delivered, in spite of negative prediction that we will never see this day and that our party will fall apart,” he said.

Tinubu thanked the committee members for the show of dedication and commitment and for ensuring a successful national convention.

He also thanked Adams Oshiomhole, the new national chairman of the APC, saying that:” you are a true reflection of the saying that no matter how short a man is, he will see the sky.”

He, however, asked members of the new National Working Committee (NWC) of the APC not to abuse the trust reposed in them.

He assured that he would join other party leaders to support the NWC to enable it succeed on its mandate to move the party forward.

Also nobel laureate Prof. Wole Soyinka had on Saturday said that former President Olusegun Obasanjo is the least worthy of former Heads of State to champion the political recovery process of the nation.

He said by doing so, Obasanjo has “crossed the red line”.

Soyinka stated this in Abuja at a Gala Dinner and Award Night hosted by the Federal Ministry of Information and Culture as part of programmes of the 67th World Congress of the International Press Institute (IPI).

Soyinka, a Guest of Honour at the dinner, described Obasanjo as a “hypocrite.”

He said he would soon launch a book where he articulated his claims and also made a call on the need for the younger generation to take over the reins of the country.

“I have brought out a publication which title is in Latin but it means “Who watches the Watchmen” .

“That publication is coming out simply because I will like to see new blood in government in this nation.

“I think this corrupt and hypocritical geriatrics should stop recycling themselves.

“They should stop trying to co-opt their former cronies to take over the reins of governance in this country.

“On July 4 at Freedom Park in Lagos, the pamphlet will be unveiled and will confront Obasanjo with his crimes of the past which incidentally are not being newly articulated.

“I say again that people are their own greatest enemies, because they forget very fast. Obasanjo is the greatest hypocritical leader this nation has ever produced,” he said.

The Professor of Literature and a critic said contrary to claims by some people he has “nothing personal against late Sani Abacha” a former Military Head of State.

Soyinka was responding to a questioner who wanted to know why the Nobel Laureate always displays open hatred for Abacha.

“You say I don’t leave Abacha alone even after death, it is not true.

“If I am walking through the street, and I see a structure raised in honour of a torturer, a murderer and a thief so recognised by the entire world that we are still chasing his loots all over the world, I cannot keep quiet.

“If I see a structure or monument in honour of that person, I have the responsibility to tell whoever did so that you cannot be serious with fighting corruption,” he said.

Soyinka congratulated the Nigerian Journalists for bringing IPI congress to the country for the first time adding that the timing was remarkable.

“The timing is remarkable in the sense that IPI is being hosted by a nation whose current President, Muhammadu Buhari, is somebody I refer to as born again Democrat.

“Not so long ago, as a military leader, he came out openly that he will tamper with the press freedom and he matched his words with deeds.

“Here you are today, that same president is now actually trying very hard and most successfully to respect the freedom of expression.

“It goes to show that all is not lost in this nation,” he said

Soyinka rated the Buhari Administration 55 per cent in press freedom and freedom of speech.

To improve on the rating, he suggested elimination of “secret, subtle and self censorship” as well as often submission to pressure.

“For instance, we cannot continue to hide under the subtle threat of – do not heat up the polity- even when we know that the polity deserved not just to be heated up, but to be fired”.

“If we disregard that, which is a grey area, I am optimistic that we will in a couple of years attain 75 per cent guaranteed in freedom of speech,” he said.

He also called on journalists to continue to discharge their roles with courage and improve on investigative journalism.

Soyinka added that the whistle blowing policy should be sustained so that the criminal elements will understand that the hiding zones are shrinking everyday. . (NAN)