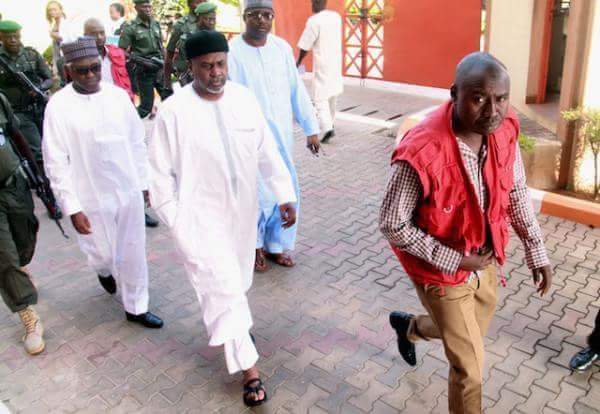 The federal high court in Abuja has served a warrant of release of Sambo Dasuki on the director-general of the Department of State Services (DSS) and the attorney-general of the federation and minister of justice.

A federal high court had on July 2 granted Dasuki conditional bails which he perfected full today.

According to PRNigeria, a court bailiff accompanied by the two sureties who stood for Dasuki officially served the DSS chief and minister of justice with the warrant of release around 1pm Tuesday.

Although the sureties had anticipated that the detained ex-NSA would be handed over to them, sources, however, said that the SSS boss may need to contact the presidency before finally handing over Dasuki to the sureties in compliance with the judgement of the federal high court.

The warrant of release dated July 16, 2018 with a title ‘Verification of Bail Conditions’ and signed by Mba Nkem A. Omotosho, deputy chief registrar was served on the DSS headquarters and the office of minister of justice in Abuja.

The warrant of release read in part: “Pursuant to the judgement Order made on Monday the 2nd day of July 2018 granted by his lordship, Hon Justice Ijeoma L. Ojukwu, directing various conditions to be fulfilled prior to the Release on Bail of the Applicant (Col. Sambo Dasuki Rtd).

“I have scrupulously verified the entire conditions of bail as ordered by his lordship and the three ambits are fulfilled,” he said.

“Hence, the respondents, the Director-General, State Security Services, and Attorney General of the Federation are hereby notified as directed by his lordship for the subsequent compliance of same.

“Attached herewith is the enrolled Order of the Court and all the necessary bail documents for your perusal and aggrandizement.”

Before the latest judgment by Ijeoma Ojukwu, the judge, on his fundamental human rights, Dasuki had previously perfected bails granted him by four different judges of high courts including Ademola Adeniyi and Ahmed Mohammed of the Abuja federal high court and Hussein Baba-Yusuf and Peter Affen of the FCT High Courts.

The ECOWAS court of justice also ordered his immediate release from detention.

At the time of this report, friends, associates and well-wishers of the former national security adviser have stormed his residence eagerly awaiting his final release from detention by the federal government.

Dasuki is being prosecuted by the federal government for alleged corruption and possession of arms.

RE: Fraud: Abuja Hotelier,Pastor remanded in Prison *The true side of the story