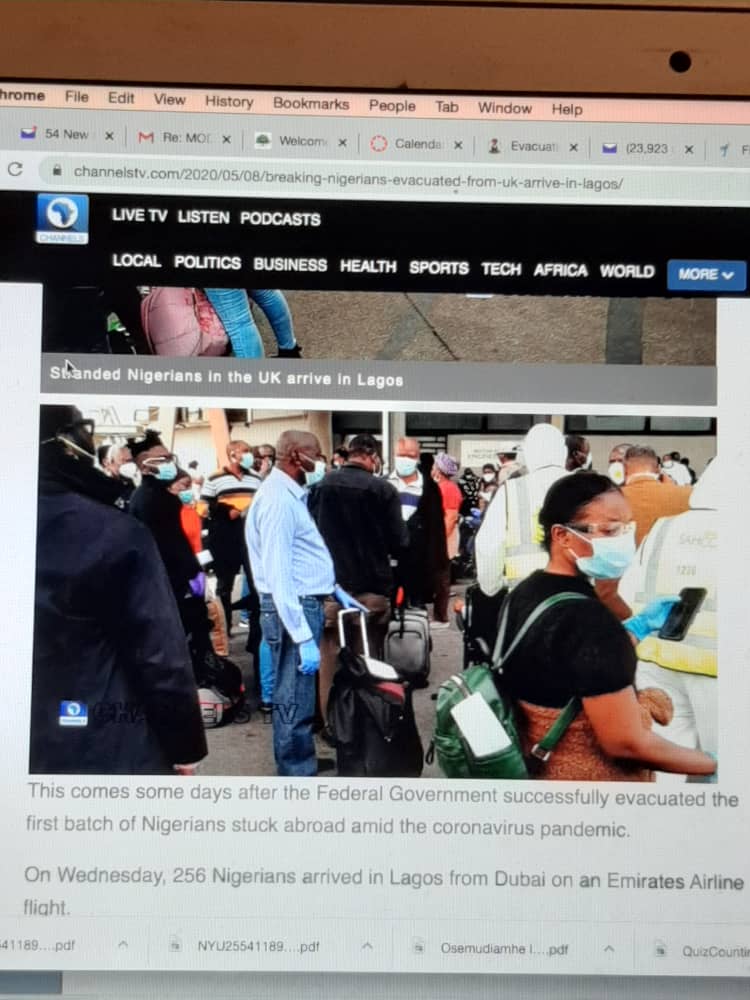 Ghali Umar Na Abba, former speaker, Nigerian House of Representatives and over 3OO other Nigeria passengers on a flight from Heathrow Airport, London  have being sitting on bare floor at the tarmac  at the Murtala Mohammed International Airport, Ikeja-Lagos.

According to a reliable source, whose wife is one of the passengers, said the Plane arrived at about 2pm today and while the few Britons on the flight were evacuated by officials of the British High were made to sit on the tarmac without any official to attend to them.
It was gathered that Social distancing preached daily by the Presidential Task Force on Covid-19, is completely discarded by the Foreign Affairs Ministry’ s organised UK Evacuation today, the 8th of May, 2020.
Sad for these Nigerians who practically didn’t sleep last night so that they could make it to the Heathrow’s Terminal 5 at 4am latest for the 7am flight and given only one slice of bread on the flight without any means to getting any food as at 4pm. They were cited sitting on the bare termac concrete floor in the scorching Lagos sun.
According to an affected passenger;  “Are these Nigerians being punished by their country for being stranded abroad? Why couldn’t the people in charge of this process move those going to Abuja directly to the capital city and leave those going to Lagos in Lagos?
“This would have resulted to better utilisation of the spaces they have in Lagos and those in Abuja. What a country” he concluded in exasperation.
It is hoped that if eventually these Nigerians are finally moved to Abuja and quarantined after the mandatory two weeks period would not be left in Abuja to find their way home  without local flights and ban on interstate road travel?
In his response, the foreign affairs minister, Geoffrey Onyema at a briefing on the issue aooologised for the mixup insisting that the blame was with the British Airways.
According to him,  the airline was to airlift the passengers but reneged insisting that most of their citizens were resident in Lagos and needed to attend to them.
10
Share