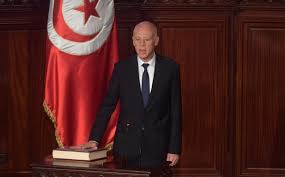 The 61-year-old law professor has no prior political experience, never held office and barely ran a campaign.

Saied sealed a resounding victory in a runoff election on October 13, largely buoyed by a groundswell of support from young voters. He won just over 72 percent of the votes, with about 27 percent of ballots cast for his media-mogul opponent Nabil Karoui.

He succeeds former President Beji Caid Essebsi, who died in office in July.

A perhaps unlikely aspiring leader in the Arab world, the austere and scholarly Saied stood apart from the other 25 candidates in the first round of Tunisias presidential election.

After winning that round, he announced he would not campaign ahead of the run-off election against then-imprisoned Karoui, saying it would give him an “unfair advantage”.

Observers say its that openness and obsession with equity that has connected with Tunisias youth, who, above all, see Saied as an honest leader offering them the keys to the nations future.

During his meteoric rise, Saied vowed to fight corruption and promote social justice, while saying access to healthcare and water is part of national security and that education would “immunise” youth against extremism.

He has been honest about his socially conservative and controversial views, which he expresses without the slightest hesitation: Homosexuality is alien to Tunisian society, capital punishment should be maintained, and men and women cannot inherit equally.

However, he has vowed he will respect the social freedoms enshrined in law in recent years.

Selim Kharrat, president of Tunisian NGO Al Bawsala, said Saieds popularity was in part fuelled by disenfranchisement with a political system that has failed to address core economic needs.

“The current atmosphere where many politicians are caught up in corruption scandals has helped this seemingly simple man,” Kharrat told Al Jazeera after the first round of elections.

Saieds unadorned profile has stood in stark contrast to that of Karoui, who was arrested in late August on money-laundering and tax evasion charges, Kharrat said.

“Hes received no funding from any of the big parties or abroad, notably the better-off Arab Gulf countries, and this has shielded him from any suspicion,” he added.

A constitutional law expert, he often appeared on television stations to explain issues of public interest, which at the time mostly revolved around the drafting of the countrys 2014 constitution.