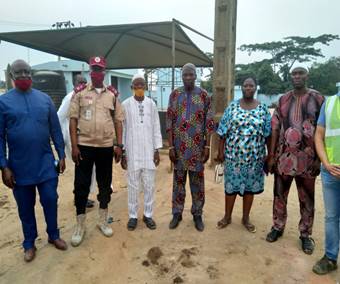 Officials of the Federal Ministry of Works alongside other stakeholders have hailed contruction giant, Julius Berger Nigeria PLC for what the Baale of Aseese ommunity on the Lagos-Shagamu expressway, Chief Jamiu Kasumu Sholola described as “the enviable work the company is doing in this area.”

The highly respected community leader spoke at the stakeholders meeting  convened Wednesday to address recent complaints allegedly thrown up when construction works on the highway got to Aseese area.

According to the Baale: “The Aseese ommunity people are happy withJulius Berger. We did not like motorists having to make u-turn at the junction of our community. We complained to Julius Berger and they have agreed to address our concern by closing that u-turn and relocating it. We sincerely appreciate Julius Berger’s considerate willingness to address our community’s safety concerns about the said u-turn. The company’s action assures for every member of our community. So, whatever disagreement there was as a result of the location of the u-turn at our community junction has been resolved by Julius Berger’s very good, swift and proactive action in our mutual interest. This is the reason we trust the company’s reliability in every professional and social situation regarding the Lagos-Shagamu expressway project. We have total confidence in the contractor.”

Also present at the meeting with the community was the Deputy Corps Marshal, Federal Road Safety Commission, FRSC and head of the organisation’s operations on the Lagos Shagamu highway, GK Hamzat. He appealed to the community leaders saying that construction work in any area should not be seen as some problem adding that it is a blessing of progress coming to the community. Continuing, the Deputy Corps Marshal said, “I wonder why people look at construction work in an area as problem. Construction work can only cause little delay especially in vehicular movement. Speed may then be reduced to say, 50km per hour. It is not supposed to cause holdups. It is not good to blame the construction company everytime traffic jams occur, especially when occassioned by drivers’ impatience and sometimes, even drivers’ reckless and unprofessional behaviour at the wheels. They must know today that majority of the accidents and traffic holdups are caused by pedestrians and vehicle owners. Whether the vehicle owners are commercial or private, they are responsible wholly for the hiccups at construction areas like Aseese.”

In his remarks, the Chief Resident Engineer of the client of the highway, Federal Ministry of Works, Engr. MO. Komolafe thus urged the leaders to continue to sensitise their people that Julius Berger means well and that whatever contruction works and relevant adjustments the company embarks on in the process are for improved traffic and welfare of the people of the community.

“Help tell the very good community people that Julius Berger means well. Whatever inconveniences they feel now is only temporary. We are building the road for the people”, the ministry official added.

Head of Operations, Ogun state-ownedTraffic, Compliance Enforcement Coirps, TRACE, Ojerinde Kabir, expressed his delight at the pace of work on the busy highway. “But Aseese people will thank God for a company like Julius Berger. I have followed their every moment on this Expressway by virtue of my official duty here. I praise them highly because the company really means well for the communities situated along the highway.”

Julius Berger’s Head of Operations on the LSE project, Olaf Thamm did not mince words in detailing to the community leaders on aspects of the ongoing construction work at Aseese area. He said the company has plans to address the community’s complaints including the need to close a u-turn earlier created on the highway in the area. An alternative route, he added, will be opened to ease vehicular traffic in and out of Aseese town. He seized the opportunity to inform the community leaders that there are plans in the project to build pedestrian bridges and related accesses across the highway. Work on these he added, would soon be kicked off.