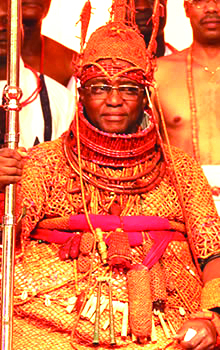 His Royal Majesty, Omo N’Oba N’Edo, Uku Akpolokpolo, Ewuare II, Oba of Benin, has paid a Royal and traditional visit to the site of Emotan Shrine, opposite Oba Market in Benin City.

The Omo N’Oba among other activities performed certain sacred traditional rites of edification and fortification.

Accompanied by the Iloi (Queens of the Royal household), a large throng of Chiefs, Enigie, Priest of different divinity and deistical leanings, market women, members of the Royal family and a mammoth crowd to the Emotan Shrine, the Omo N’Oba meticulously performed a number of sacred rites, with the active involvement of all the customary functionaries and groups.

Historically, Emotan lived and came into reckoning in the reign of Oba Ohen and his children, including Prince Ogun, who later became Oba Ewuare the Great in about 1440AD – 1473AD.

Though, a widow and childless, her heroic exploit in strategizing and assisting Prince Ogun, the rightful heir to the Royal stool to reclaim the throne from the usurper Oba, Uwaifiokun earned her the status of veneration.

Thus, when Emotan died, Oba Ewuare directed that she be buried at the spot where she used to sit and sell her wares opposite the Oba Market.

In addition, Oba Ewuare then made a proclamation to deified Emotan, and ordered that every man invested with a title had to visit to pay homage at Emotan Shrine, and also that all funeral processions must visit to pay reverence to the spirit of Emotan.

Therefore, the presence of the Benin Monarch, His Royal Majesty, Omo N’Oba N’Edo, Uku Akpolokpolo, Ewuare II, Oba of Benin at the Emotan Shrine, was symbolic and spiritual in many respect, the legendary Emotan having being deified and venerated closed to six hundred years ago, by Oba Ewuare II great Ancestor.

Interestingly, at the site of Emotan Shrine, which the Omo N’Oba has completely transformed into an esthetic model, Omo N’Oba Ewuare II prayed fervently to the spirit of Emotan, the great Royal Ancestors and the Almighty God to ceaselessly grant him radiant health, good fortune, progress and longevity.

Expectedly, the Omo N’Oba also prayed for robust health and prosperity of members of Royal Family and the Benin Kingdom. As well as the peace, progress and oneness of Nigeria.