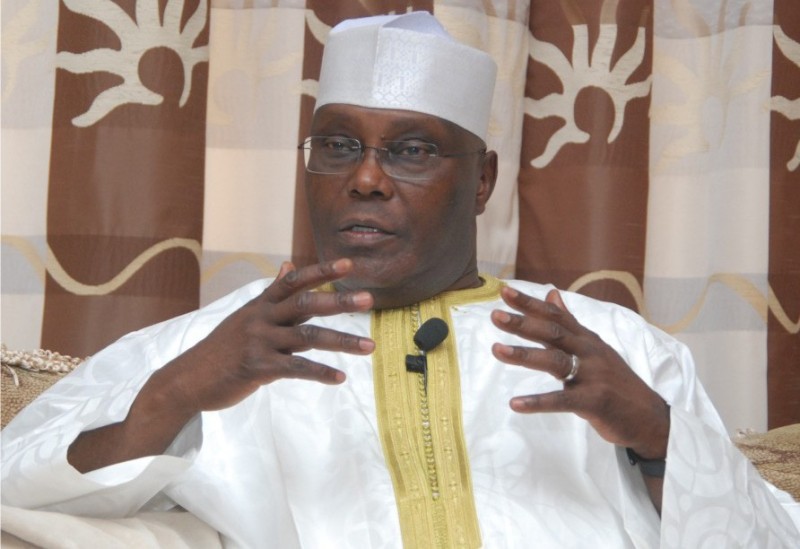 A fraudster that threatened to kill foremost PDP presidential aspirant and former President Atiku Abubakar and his family members has been arrested.

According to a press release made available to PenPushers and signed by the Police Force  Public Relations Officer, DSP Jimoh Moshood, the suspect Augustus Akpan was arrested at the Lagos Ibadan toll gate while trying to flee the country.

Augustus Akpan who hails from Edemaya village, Ikot Abasi LGA, Akwa Ibom State is 43Years and had on him at the time of arrest exhibits such as one (1) Samsung (Galaxy S6 Edge +) Mobile Phone and the SIM Card used by the suspect to send the threat messages to Fmr Vice President, Atiku Abubakar GCON, His wife and Daughter.

The Threat Text Message to the Fmr Vice President, Alh. Atiku Abubakar read;“Turaki Atiku, we are watching you and your family, we ask you right now to withdraw from the race for Presidency, we will kill, rape your wife and daughters. That your ambitious and black daughter Maryam who worked at CBN and left because we were going to mess her up. We will molest, rape, deform her and kill her. Your daughter Fatimah the former Commissioner of Health in Adamawa State, we have a lot of information about her. Also pictures of her naked body, we will mess your overly prostitute wife Jennifer up. We have a lot about. Let Buhari run against your against your PDP members. We know that you are bigger than all those candidates in PDP. That is why we need you to step down. We will blow your plane off from the sky and we will poison you and your family. Atiku Abubakar, take our words for granted and watch what will happen to your family before you. You are going to see what we will do to you and your family. We know where and where your children travel to. We have watched your daughter who is a strong supporter of her father (your daughter Maryam) at number 5, Buzi close and number 5, Lake Maracaibo close”.

While that to his wife, Jennifer, read;  “Tell your husband to step down. We will blow up his plane and kill all of you his family. We will rape you and all his daughters and also kill all of you out there. Do not underestimate us. We know your office at 13 Danube Street Maitama. We will blow up the place and rape all your step daughters that we know you don’t like already. Tell him to step down now and forget about running for the presidency’’

Atiku’s daughter Rukaiya had this message sent to her by the fraudster; “Tell your dad to step down. He should forget about the Presidency. If he refuses, we will blow up his plane the Gulf Stream from the sky and also rape you and kill of his daughters. No amount of Police or protection will stop us. We know where all of you live in. We know number 5 Buzi close and number 5, Lake Maracaibo close. Try us and blood shall spread’’

The police that on the receipt of complaint of THREAT AND INTIMIDATION from fmr Vice President, Alh. Atiku Abubakar, the Forty Three (43) years old Augustus Akpan was trailed and eventually arrested by the IGP Intelligence Response Team and that during interrogation, he confessed to the crime and admitted that he resorted to the threat and intimidation when all efforts to extort money from the former vice president were unsuccessful.

The suspect, was also said to have admitted in his confessional statement that he is a professional fraudster and not working for any political party, that his mention that ‘Let Buhari run against your other PDP members’ in his threat message to the former vice president was merely to divert attention.

Akpan who is fluent in English, Ibibio, Russian and Portuguese languages respectively is alleged to have robbed a lady of the Phone and the SIM card he used for the threat and intimidation

The suspect, the police said, further confessed that he had threatened, defrauded and extorted huge sum of money in Naira and foreign currency from so many prominent personalities and their family members while posing as an Federal Bureau of Investigation (FBI) and Central Intelligence Agency (CIA) agent.

PRESS RELEASE RE: HOW SOLDIERS FIGHTING BOKO HARAM BEG FOR FOOD AND SLEEP IN CLASSROOMS