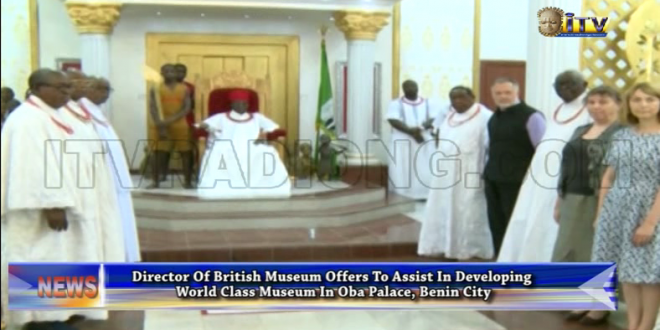 His Royal Majesty, Oba Ewuare II who stated this when he received the Chief Executive and Management of Wells Green House Farm Limited in his Palace said farming is the first profession of mankind, and commended Captain Hosa Idahosa Okunbo for his determined effort at ensuring the realization of the farm project.

The Oba of Benin says the natural resources such as crude oil could be depleted, but farming continue to thrive through all ages which explains why government at all levels are encouraging agriculture.

The Omo N’Oba encouraged the people to embrace farming in order to contribute to job creation, and food availability in the country.

Earlier, the Chief Executive and Managing Director of Wells Green House Farm, Captain Hosa Idahosa Okunbo, told His Royal Majesty that he was in the Palace to present the first fruit harvested from the farm to the Palace for Royal blessing in order for it to flourish.

Captain Okunbo expressed gratitude to the Oba of Benin for his encouragement and support, which he said spurred him to continue with the farm project, despite any odds.

The Inneh Theatre Troup that accompanied Captain Okunbo on the visit later entertained the Omo N’Oba, Chiefs and other guests present.

The Benin Monarch also received Colonel Wisdom Ogbewemwenkon Osemwende, US Army retired who was accompanied on a courtesy visit to the Omo N’Oba by some members of the Benin Royal family.

His Royal Majesty assured him that the Palace would continue to pray for him so that God and the ancestor will grant him his heart desires.

Oba Ewuare II advised Colonel Ogbewemwenkon to be of good behaviour and should endeavour to study the peculiar nature of politics in Nigeria before declaring his interest.

Colonel Wisdom Ogbewemwenkon Osemwende had informed the Omo N’Oba about his ambition to contest for the Senate position on the platform of All Progressives Congress and solicited for Royal blessings and support.